In January when I went to visit physicists at CERN on the French-Swiss border just outside Geneva–one of the world’s largest scientific research centers–my expectations weren’t very high. “Hard sciences” such as physics, chemistry and math never really attracted me due to their predominantly male connotations. I only knew vaguely what was going on at CERN (the French acronym for Conseil Européen pour la Recherche Nucléaire, or European Organization for Nuclear Research)–something about recreating the Big Bang, finding the one particle of matter that will confirm all theories of modern physics, and discovering what the universe is made of and how it works. Little things like that.

I was mostly there to chaperone my significant other, who had made an animation for the organization and thus had been invited to a guided tour of its infamous premises, which include its large hadron collider–basically a huge circle-shaped underground tunnel in which atomic particles collide. But what I discovered, to my delight, was not just men in white lab coats but feminist physicists dedicated to removing the “male” stamp on science and working hard to make it more attractive to young women and girls.

Our guide introduced me to physicist Pauline Gagnon, an active feminist and editor of the ATLAS-experiment newsletter. Gagnon told me that among the 10,000 physicists active at CERN, 16 to 18 percent are women–an underrepresentation, certainly, but a great step forward from the numbers of women when the facility opened in the 1950s.

To celebrate that–and eventually raise those numbers–Gagnon has chosen to honor the women of CERN on this International Women’s Day. All control rooms and accelerators will primarily be staffed by women. “That means that on March 8th, the largest accelerator in the world and the more complex experiments will be operated mostly by women,” she told me.

There will be a live  webcam in each control room, and Fermilab– a major particle-physics lab located in the U.S.–will also join the event. At CERN, each experiment group has also produced a special poster featuring the women involved, and they will be displayed both on site and on the website dedicated to the March 8th event.

Gagnon hopes that such actions and role modeling will lay down a welcome mat for girls interested in careers in physics and other “hard science” fields. “We want people to know  that this is no longer an off-limit place for women, that there are already many women in the field and that things have changed immensely,” she said. “Plus, it is terribly exciting work and we’re having a lot of fun.”

Hopefully efforts like these will encourage more girls to stop thinking as I once did that  “hard science” is male. Instead, they can start dreaming of becoming future physicists and Nobel Laureates.

Read more on jobs and economic issues from Ms. here. 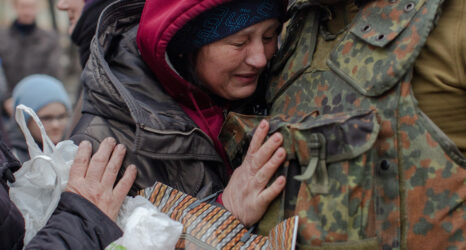 How Women Are Breaking Into the ‘Boy’s Club’ of Politics, in Oregon and Beyond: Weekend Reading on Women’s Representation

Forced Pregnancy Is Involuntary Servitude, Violates the 13th Amendment
The Political Religions That Brought Down Roe
Reimagining the Gendered Workplace Post-COVID: It’s Time for a Redo