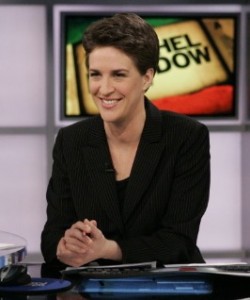 If you told me two years ago that I would soon be watching a cable news show hosted by an out butch lesbian, I would have expected you to follow up with “April Fool’s!” But today, the charismatic Rachel Maddow–whose birthday is April 1st, no fooling!–has become a fixture on the nighttime political commentary scene. Like the pundit herself, The Rachel Maddow Show is smart, witty, frequently geeky and unabashedly feminist–something virtually unheard of on mainstream TV.

Maddow makes a point of including a more diverse body of guests and commentators on her show than you find on a typical TV news program. Mother Jones rightly praised her for “representing on a lot of different fronts: women, youngish people, gays and lesbians, lefties, Oxford PhDs, comic-book enthusiasts…” To which Maddow added, “people who aren’t conventionally attractive or a size zero, people with unruly hair.” What Maddow proves on a nightly basis is that presenting a diversity of views, including those with whom she disagrees, can make riveting television.

To celebrate her birthday, here’s my list of the five best segments of Maddow’s show–so far. If you’d like to remind us of your favorite or send a birthday message, please comment below!

1. “They Know Feminists” (October 21, 2008)–Maddow responds to comments by Rick Davis and William Bennett on why Sarah Palin drives feminists crazy. Sometimes laughter is the only fitting answer to outrageous sexist statements; she gives these guys a lesson in the power of feminist humor.

3. “I Guess I’m a Racist” (December 2, 2009)–Maddow and guest Melissa Harris-Lacewell discuss an anti-health-care reform ad that plays the race card. Harris-Lacewell always shines with Maddow; here, she and the host offer nuanced political analysis that helps viewers make sense of the deeply polarizing issue of race and politics.

4. Interview with “ex-gay” Richard Cohen (December 8, 2009)–This is the second part of Maddow’s two-night interview with the so-called “Sexual Reorientation Specialist.” She methodically dissects the absurd points put forward by this man and holds him accountable for the hatred he has sown. Contains one of the all-time best Maddowisms: “I’m reading from your book, dude.”

5. “Grand Old Panic” (January 22,  2009)–Interview with former George W. Bush speechwriter David Frum on violent rhetoric. Maddow is formidable when she dukes it out with hostile guests. Here, she one-ups Frum’s patronizing tone with calm, rational debate, and forcefully defends her use of satire and  irony for civil political discourse. This segment earns extra irony points now that Frum has been ousted from the American Enterprise Institute.