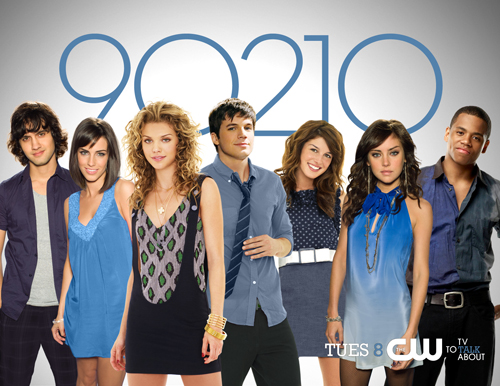 We know our audience here at Ms. magazine. Which is why we’re pretty sure you didn’t catch this week’s episode of the new 90210 and, in particular, requisite quirky girl Erin Silver’s shout-out to Ms.

Here’s how it went down (sorry, we don’t have a clip):

Adrianna: Hey, I wanted to bring you both a flyer for our band’s gig. I hope you can make it.
Naomi: [reading the flyer] The Glorious Steinems? What is a “steinem,” that disease you get in your eye?
Adrianna: Beats me, they had the name when I joined.
Silver: You guys kidding? Glorious Steinems…Gloria Steinem? Come on. She’s only like one of the most important feminists. Editor and publisher of Ms. magazine —
Naomi: Ohh! I know what a steinem is – it’s a beer mug.
Adrianna: Yes! That is totally it.
Silver: [Rolls eyes]

Ok, so it leaves a little to be desired. And Gloria’s technically an editor emerita of Ms. But how many programs on the tween-centric CW network have ever even mentioned the F-word, let alone featured strong female characters who identify as Ms. magazine-reading feminists and join girl bands named after Gloria Steinem? One, that’s how many. And we don’t think it’s just because we’re practically in the same zip code (90212).

90210 certainly has its faults. For one, a teen program founded on Beverly Hills class privilege is fundamentally flawed. Secondly, the uniform stick-thinness of the entire female cast probably hurts more than it helps teen body image. And I’m sure you could name more.

But compared to its closest peer, the salacious Gossip Girl, it has some things going for it. Among the issues it tackles: teen pregnancy (featuring characters who vocally advocated for abortion), dating violence, mental illness, interracial and lesbian relationships, and alcoholism. Moreover, it tends to characterize teen relationships as teen relationships, in all of their juvenile glory–a far cry from the hard-alcohol-accented, wayyy-too-sexually mature, adult-like relationships of Gossip Girl. (Aren’t there any parents on the Upper East Side??) Oh, and did we mention that Ms. got a shout-out on 90210 and not GG?

So, bottom line: It may not be My So-Called Life (which is apparently sorely missed by others on our staff), but at least it’s trying a little bit. We’ll just keep our fingers crossed for a 90210 feminist spin-off prominently featuring the Glorious Steinems and scenes of Silver reading our magazine aloud. Shall we call it…90212?

DISCLAIMER: Catherine is the only member of the Ms. staff who openly admits to watching and/or appreciating aspects of 90210–direct your ire at her and not the publication at large.