Suffragists didn’t stop at postcards to get their message out. By affixing attention-grabbing, oversized stamps on their outgoing mail, suffragists could reach potential voters before a letter was even opened.

Many of the stamps called attention to timely issues and events, such as this one announcing a worldwide suffrage convention in 1913. Delegates from 25 nations went to Budapest to celebrate victories and plan strategy, as well as to address ahead-of-the-time issues such as sex slavery and the trafficking of women. 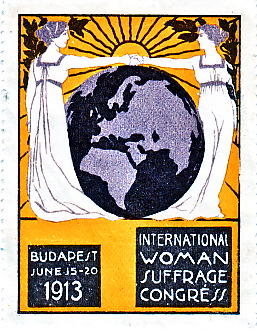 Back in the U.S., suffragists engaged in a state-by-state battle to pass  referenda giving women the right to vote, winning victories in much of the Western half of the U.S. by 1915. That’s no coincidence: The West was always more open to new ideas, and women pioneers’ strength and struggles were still honored by their sons and grandsons. Moreover, the easiest states to win were those next to states where women already voted and no dire consequences resulted, so “Votes for Women” spread across the West like dominoes. This stamp shows the West painted “suffrage yellow.” 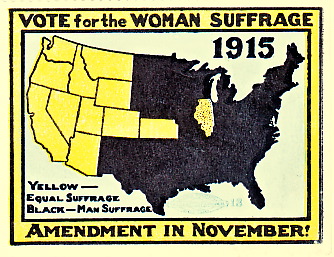 By 1915, suffragists were bold–and impatient–enough to try something new. Leaving the small Western states, they leaped the Mississippi and went for a risky “grand slam” in four large Eastern states: New York, New Jersey, Pennsylvania and Massachusetts. Such an unprecedented victory could give suffragists seemingly unstoppable momentum. 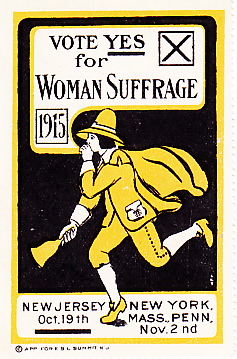 The campaign in Pennsylvania was typical of the four in its intensity:

And 330,000 personal letters went out to voters from volunteers before election day (presumably carrying suffrage stamps like this one!) 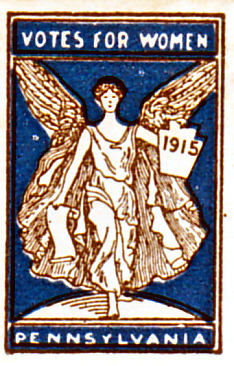 Stamps leading up to the crucial Nov. 2, 1915 vote saluted suffragist heroism. This stamp honors a flagbearer in the landmark March 3, 1913 suffrage pageant in Washington, D.C., during which women bravely marched despite a lack of police protection from unruly mobs. 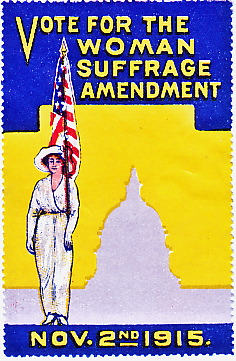 But the fall elections brought suffrage referendum defeats in all four states, leaving the National American Woman Suffrage Association (NAWSA) with some serious issues to deal with at their December convention. Alice Paul, president of the group Congressional Union for Women Suffrage, and NAWSA president Carrie Chapman Catt had their final negotiations to see if there was any possibility of an alliance. But their ideas of what now needed to be done were too incompatible. The Congressional Union would soon become the more militant National Woman’s Party, while NAWSA relied on its traditional conservative approach. 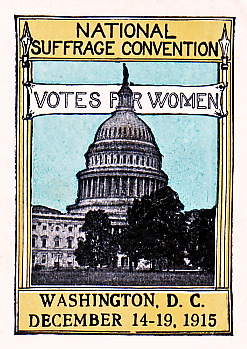 Fortunately, the combination of these strategies produced total victory a little less than five years after the stinging defeats of 1915. On August 26, 1920, the 19th Amendment became part of the U.S. Constitution.

That wasn’t the end of “suffrage stamps.” In 1970, 1995 and 1998, the winning of the vote was commemorated on official U.S. first-class postage, and numerous suffragists have been recognized with their own stamps, beginning with Susan B. Anthony on August 26, 1936. 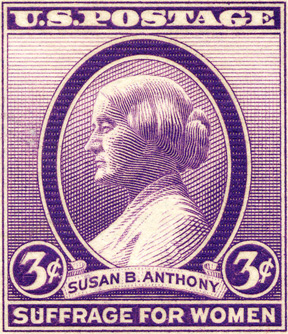