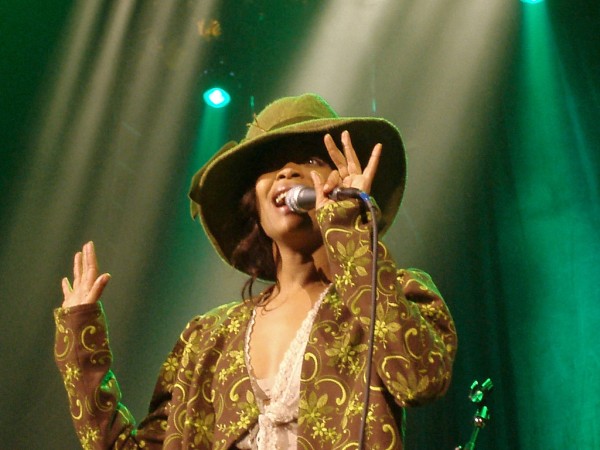 Folks can’t stop talking about Erykah Badu’s minimalist, one-person-crew video effort for her newest song “Window Seat.” Shot in a single take, guerilla-style, Badu trailed the route of President John F. Kennedy at Dealey Plaza in Dallas, simultaneously shedding all her clothes until she reached the place where Kennedy was shot, then she collapsed to the ground as a gunshot sounds in the distance.  The video has been called everything from profane to a huge failure to successful performance art to a visual representation of the artist’s brilliance.

Here’s how Badu herself explains her motivations:

The song ‘Window Seat’ is about liberating yourself from layers and layers of skin or demons that are a hindrance to your growth or freedom, or evolution. I wanted to do something that said just that, so I started to think about shedding, nudity, taking things off in a very artful way. I am from the theater, and this is just a part of expression … A part of art.

Badu’s video also encourages a consideration of the nude Black female body in public spaces and within art. Just over the past year, the bodies of Michelle Obama, Caster Semenya, Rihanna, Gabourey Sidibe and Serena Williams, among others, have all been publicly debated, undercut by strong reactions ranging  from revulsion to fascination. Often, discussions on the Black female body are reductive, reduced only to the butt. The pop culture news site Jezebel even postulated that the voluptuousness of Badu’s butt inadvertently obscured her overall message.

Then there’s the policing that sometimes accompanies the publicly revealed nude Black female body: Remember the Janet Jackson fiasco a few years back at the SuperBowl? After Janet’s breast was exposed, the TV industry enacted strict regulations to avoid a recurrence. Badu herself is facing citations for public nudity.

In Badu’s video, a Black woman creates a self-determined space in which she can explore her body on her own terms, outside of objectification. Renina Jarmon wrote of this at Racialicious:

American culture in general and pop culture specifically has never been a hospitable place for nude Black women. Let alone nude Black women making high concept music and music videos. … When was the last time you saw a Black women’s body and sensuality centered FROM her perspective in Pop Culture? … ‘Window Seat’ feels like a lightweight Corrective for “Venus Hottentot” and thousands of nameless video vixens. Black women’s bodies are ALL through rap videos, but their voices are muted.

In an interview with 106 & Park, Badu revealed that in addition to being terrified of making herself so vulnerable while shooting this video, she is also breastfeeding her youngest daughter. With the reveal of her body, she not only stripped off layers and called attention to  black female sexual marginalization, but also to the function and power of the female body as a temple of nourishment and the beginning of human life. In realizing this power outside of a groupthink that encourages female insecurity and objectification, one is made vulnerable to being ostracized–hence her assassination at the end of the video.

I have been a fan of Badu’s since her CD Baduizm was released in 1997. To me, the “Window Seat” video reveals the depth of an artist willing to challenge the historical precedents of anxiety and voyeurism around the bodies of Black women. To me, “Window Seat” is courageous.