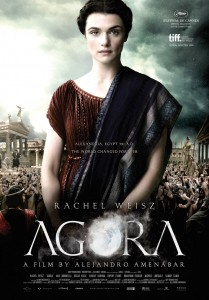 You might have heard about or seen the new Spanish-produced movie Agora if you happened to attend recent international film festivals such as Toronto or Cannes. It portrays the life and times of Hypatia, the most prominent woman philosopher of the ancient world known to us.

It is surprising and thrilling to find Hypatia committed to celluloid, particularly as she is frequently maligned and neglected by philosophy textbooks and classes. This film goes some way toward mitigating this unjustified and sexist skewing of the history of philosophy, as Hypatia is depicted as the influential and important intellectual she undoubtedly was.

Having lived from approximately 370 to 415 A.D. in Alexandria, Egypt, Hypatia followed in her father Theon’s footsteps as a mathematician and an astronomer. She quickly exceeded all expectations, however, and became a respected and admired teacher of science and philosophy. Students traveled from all over the world to study with her and she was purportedly paid by public funds, eventually heading the Neoplatonic School at Alexandria. (Hypatia’s school tended toward objective, scientific readings of Plato and Aristotle rather than the speculative readings of the Athenian School). There is some debate about whether Hypatia’s writings are lost, or whether they have become integrated, at least in part, into the works of other thinkers. If you want to find out more about this and other intriguing issues on Hypatia’s life and works, perhaps this can quench some of your curiosity.

To say that Hypatia’s achievements were unprecedented for a woman is putting it mildly. She was so highly esteemed that she thrived within the Christian Alexandrian regime despite being a pagan. Tensions between Jewish, Christian and pagan factions were rife at the time, and Hypatia’s influence must have been a thorn in many a side. One such side belonged to the bishop of Alexandria, Cyril, who came into conflict with the civil prefect, Orestes. Knowing that Orestes was advised by Hypatia, it is conjectured that Cyril played a direct role in Hypatia’s eventual murder, although whether it was he who gave a group of monks the order to viciously skin, quarter and burn her, is not known.

The movie certainly takes this line, with Cyril taking the lead as chief “bad guy,’ Orestes portrayed as a love-sick admirer and the fictional character of Davus serving as Hypatia’s slave. Having fallen in love with Hypatia (played  by Rachel Weisz), Davus tries to spare her  the real, brutal death for which she is usually remembered–but you’ll just have to see the ending for yourself.

And North Americans  might soon be able to do so, as Newmarket Films will be releasing the movie, already a box-office hit in Europe, on this side of the Atlantic. Although the movie liberally avails of dramatic license–Hypatia shows her menstrual rags to Orestes, rather than to an unknown admirer (as the story usually goes)–I would urge all to see this fascinating film by Alejandro Amenábar. It brings Hypatia and her world back to to life, thereby adding to feminist efforts to have women philosophers recognized as major figures of Western philosophical thought.

Clara Fischer is a philosopher and musician. When she isn't busy writing, reading, playing the piano or singing, she's preoccupied with analysing the wisdoms of her cat.