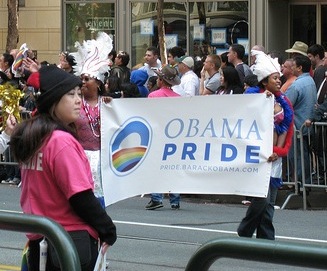 President Obama has rightfully been criticized for his slow progress on key LGBT issues, such as repealing “Don’t Ask, Don’t Tell.” But today he deserves a hug for his White House memorandum requiring visitation rights for gay partners at hospitals receiving federal funding.

I take this ruling personally because of what happened to me 20 years ago during the first and only time I landed in a hospital.

I was experiencing an atrial fibrillation, and since I was alone and wasn’t sure what was going on with my racing heart, I called 911 and ended up in a nearby ER. As I was getting into the ambulance, my girlfriend at the time pulled up in her car and I told her where they were taking me.

At the hospital, in a curtained-off bed in the ER, I was put on a heart monitor and given Valium–but even tranquilized I was still scared. What I wouldn’t have given for a hand to hold. That’s what the woman on the other side of the curtain had–her husband was right there with her, comforting her. But when I asked after my girlfriend, I was told that she couldn’t come into the ER; she had to wait until I was assigned a room. I swear that if I’d had the comfort of a loved one right away, my heart rate would have normalized a lot sooner.

In subsequent years, when someone I love is in the hospital,  I’ve always gone around any visiting regulations–walking right into recovery rooms or ERs or ICUs without asking. And when my current partner had surgeries at Kaiser Hospital in Los Angeles, I was never restricted in visiting her.

That’s how it should be. There are too many horror stories of gay partners being blocked from seeing each other at moments of crisis and pain when they’ve most needed each other’s smile or touch.

So thank you, President Obama, for doing the right thing.

And now, how about repealing “Don’t Ask, Don’t Tell” and supporting same-sex marriage? We love you today, but we’re not going away.