Why Crazy Heart Made Me Crazy - Ms. Magazine
Skip to content 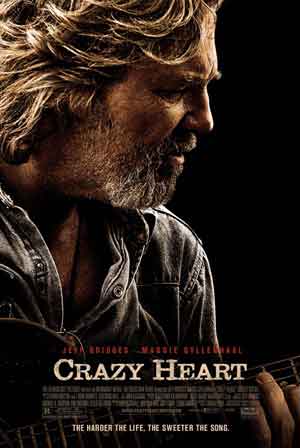 Let me say right off, I enjoyed Crazy Heart (which comes out on DVD tomorrow, April 20). My spot for the down-and-outer is as soft as the next gal’s. Jeff Bridges deserved the Oscar for portraying Bad Blake and Maggie Gyllenhaal did a fine job as Jean, the woman who helped Bad turn good.

The bone I have to pick is with the writer-director, Scott Cooper, and his stunted imagination. How else to explain the well-worn story line where the middle-aged guy falls for the woman young enough to be his daughter–who of course eagerly reciprocates? I’m sure I’m not the only woman who sat groaning in disgust in the darkness of the theater.

Not that it was unrealistic. Who doesn’t know a 50-something (or older) man who believed he could only get his groove back with a fresh young face?

And not that I don’t feel the magnetism of the celebrity, be he a politician or a country music star. Never mind that Bad Blake was a boozy, paunchy wreck, while Jean was as lovely and fit as, well, Maggie Gyllenhaal. I get that when Blake was on that stage, strumming the guitar, vulnerable, delivering a whole lot of heartache, he would touch all sorts of women. I get it, I really do.

And it’s not that I want equal opportunity for sisters my age to romp in the hay with younger cowpokes. I’m not looking for more Mrs. Robinsons seducing guileless graduates.

No, what I long for is some simple recognition that there’s beauty, romance, sexiness and passion in women as we age. I’d like the camera to gaze lovingly at faces lined with experience and laughter. I’d like complex women characters who have gone through decades of disappointment and joy, loss and fulfillment. I’d like to see captured on the big screen the fierce loyalty that grows between a couple that has been together from their hopeful twenties to the wise side of 50. Or how about women who chose to be single, who are imbued with strength and dignity and face life head-on, alone and independent–and happy?

In Crazy Heart, Jo Ann, the middle-aged waitress whom Bad briefly beds is, of course, none of these things. No, Jo Ann, played achingly by Beth Grant, is pathetic and desperate, just as we’ve come to expect.

But what if the story line were different? What if the journalist sent to interview Bad was not 30 but 50-something, like he was, and what if she were played by, say, Debra Winger? What if he found himself drawn to her coolness, her toughness?

Or what if Bad Blake had an amazing wife who stood by him for 30 years but finally had enough of his shenanigans and walks out of their trailer one day? What if he seeks to win her back? Wouldn’t the story still be compelling?

If I were a Hollywood producer, I’d take a look at the numbers. I’d see that in 2007 [PDF], 261 million movie tickets were sold to women over 40–not as many as the 296 million sold to young guys under 25, but still. Then I’d ask, Who’s creating gripping stories and complex characters and heart-grabbing romance that will reel in women? I know, among the swarm of starving screenwriters, you’re out there, somewhere.

But what do I know? Scott Cooper made a hugely popular movie. I’m just a midlife woman looking for a different kind of story.

Beth Baker is a long-time freelance writer in the Washington, D.C. area and author most recently of Old Age in a New Age (Vanderbilt University Press 2007).