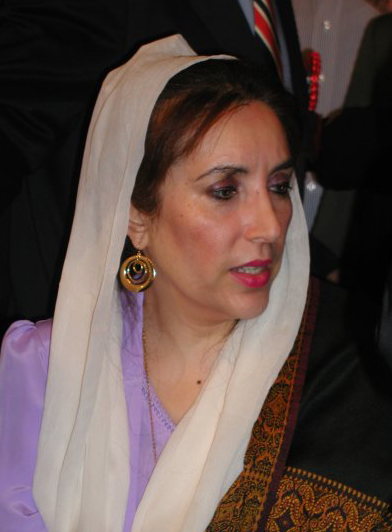 This month, the United Nations Commission of Inquiry investigating the death of Benazir Bhutto released a report [PDF] which tells us nothing we did not already know: The 2007 assassination of Pakistan’s former Prime Minister Bhutto could have been prevented if the government of then-president Pervez Musharraf had provided her with “adequate security”.

Thank you, U.N.! Only took you three years to make that obvious fact official. Where is Musharraf now, anyway? What is the point of pointing fingers so long after Bhutto’s death? A false attempt at garnering accountability is what this is. The truth is, too many men and too many politicians were only too happy to see this woman go.

However, there is one good thing that this report does do. It makes us remember Benazir Bhutto.

Fan or not, one cannot deny that with the assassination of Benazir Bhutto, South Asia lost more than just a politician. In a region with a long history of women in politics, Bhutto stood out as the first democratically elected woman Prime Minister in an Islamic country–and one who held degrees from both Harvard and Oxford to boot!

Bhutto was a powerful symbol for women in South Asia. Her homecoming to Pakistan in 2007 after eight years in exile managed to make us forget about Bhutto’s (more specifically her husband’s) countless corruption charges. Even the allegations of Benazir murdering her older brother in a power struggle to win control over their father’s political party seemed to vanish.

Instead we were introduced to a triumphant and eloquent woman returning to her country to save Pakistan from the hands of the military and the mullahs–to bring democracy back. Remember those TV images when her plane landed in Karachi? Palms opened in prayer, Benazir placed her face in her hands and wiped away her tears. She was home.

It’s  easy to romanticize those moments now, but whether or not you liked Benazir she was an undeniable breath of fresh air to the Pakistani political landscape. Her return seemed to mark a new dawn in Pakistani politics. Not only had someone arrived to challenge the mullahs, but that someone was a Muslim woman.

Even I had forgotten of my own issues with Bhutto and what else she represented: systematic, widespread, out-of-control political corruption. But I was seduced, totally captivated with the authority and eloquence with which Bhutto spoke. Watching a powerful woman challenge both the military and the Islamic extremist forces that dominate Pakistan’s political stage made me feel powerful, too.

Every time Benazir opened her mouth, she shattered the stereotype that Muslim women in the Global South are nothing but powerless victims. The courage with which she openly confronted her opposition was intimidating, but also inspiring.

Assassinated politicians are nothing new to the violent scene of South Asian politics. The region has a strong history of assassination attempts against women leaders, most of whom entered politics through their male linkage to political dynasties.

India’s Indira Gandhi was assassinated in 1984. Tamil Tiger rebels tried but failed to kill former Sri Lankan Prime Minister Chandrika Kumaratunga in 1999. In Bangladesh, which has had two women prime ministers–notorious rivals Begum Khaleda Zia and Sheikh Hasina–the former allegedly tried to kill the latter in 2000 by opening fire on her motorcade.

But Bhutto stands out among these women, and not because of her political accomplishments–which really were not all that grand. Bhutto was not even a great champion of women’s rights. In fact, under her administration, Pakistan became one of the three countries in the world to recognize the Taliban government. But just her very existence was a victory for women in a region where, despite the strides that have been made, men dominate the show. Bhutto was an undeniable symbol of the power women in South Asia could reach for.

Will there ever be another woman leader in Pakistan who will command such international attention? For the time being, the answer is no. There simply isn’t anybody of Bhutto’s stature, anywhere. Her elimination from Pakistan’s political scene was a huge victory for the Islamists, whose success has serious implications for women’s lives across the region.

We should take the U.N. report as an opportunity to remember a woman like Benazir. Regardless of what her real political motivations may have been, we should celebrate her audacity in questioning the legitimacy of her political opponents, and her courage in challenging them. The cost was her life.