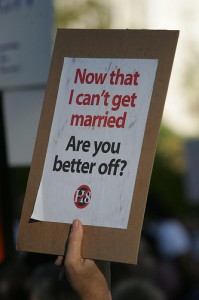 In her groundbreaking new book, From Disgust to Humanity: Sexual Orientation and Constitutional Law, political philosopher Martha Nussbaum distills the true scariness of “disgust” propaganda. I explore the book’s themes in my latest review on Truthout.

Nussbaum gives the example of the 1993 treatise “Medical Consequences of What Homosexuals Do,” by Paul Cameron, firebrand founder of the anti-gay Family Research Institute, in which he revealed the “horror story” of “fecal sex.” He claimed that “80 percent of gays” ingest “medically significant amounts of feces” on a regular basis, and also tend to “eat or wallow in it.”

Cameron and his allies–in other anti-gay groups and in legislatures across the country–can’t get enough of such descriptions, associating gay sex acts with feces, urine, blood, vomit, and other indelicacies that make for unpopular dinner-party discussion. The lurid imaginings of these folks may seem a marginal oddity, just a small, eccentric fish paddling in the sea of propaganda that washes over Americans on a daily basis. But this fish has some mean fangs. In the early 1990s, Cameron directed the effort to pass Colorado’s Amendment 2, a sweeping initiative banning anti-discrimination protections for gays and lesbians. He spoke of gay people drinking blood, ingesting urine and traveling to the U.S. from all parts of the world to “participate in this biological swapmeet.” The measure passed.

Disgust is a dangerous weapon. According to Nussbaum, we must understand its workings if we hope to comprehend how prejudice and discrimination have been hard-wired into this country’s legal system. The book examines the insidious use of disgust to achieve political goals and outlines a framework for rooting out disgust and growing a “politics of humanity” that grants liberty, justice and respect to all. Her book makes the most hard-and-fast case for the legalization of same-sex marriage I’ve heard yet–doubters will have a hard time conjuring up a comeback for this one.

Although the use of disgust-laden, anti-gay propaganda may not surface as blatantly these days as it did in 1992, it still undergirds the opposition to equal rights for LGBT Americans, Nussbaum writes. National figures are no longer sermonizing about “fecal sex” (at least not in public), but the imagery of contagion, perversity and moral pollution plays a key role in standard anti-equality arguments.

We’re all born with a gag reflex. Humans have a natural aversion to fetid, squirmy things such as excrement, worms, maggots and festering wounds. Disgust propagandists like Cameron associate a group of people with this bodily reaction, driving others to distance themselves from that group–to wall it off, to quarantine it.

Jews were once painted as contagious, homeless wanderers who must be separated from the rest of European society. “Untouchables” in India were portrayed as filthy and unfit to marry into other castes. Nowadays, undocumented immigrants in Arizona are depicted as leprosy-laden, food-tainting drug traffickers, and are sprayed with Lysol by xenophobic protesters. The politics of disgust turns people into contaminants.

In order to combat the likes of Cameron and the armies of “eewwwww,” Nussbaum proposes a “politics of humanity” that replaces projective disgust with sympathy. The basic idea isn’t radical; in fact, the same moralizers who profess a politics of disgust in the courtroom probably profess the art of love-your-neighbor-as-yourself around the kitchen table. However, Nussbaum’s formulation goes beyond neighborliness – after all, we often choose our neighbors. She envisions a framework in which we move beyond stigmatization by way of “historically and socially informed imagining,” working to sympathize with the estranged group’s humanity.

Both Nussbaum and the Constitution advise us to go forth and pursue happiness – and to let others do the same. We can only hope that the courts, the state legislatures, the White House and the American people will come to agree.

Stop Praising Colleen Hoover’s ‘It Ends With Us.’ Here’s What You’re Missing