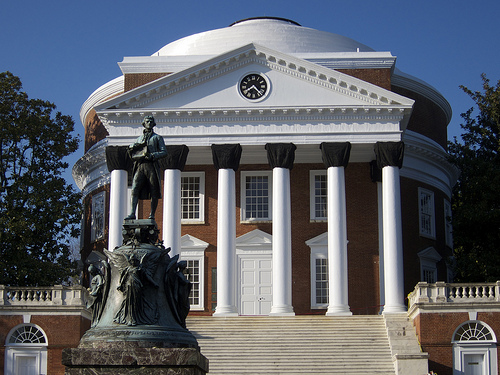 I have always held the torch so high for my alma mater the University of Virginia (UVA) that I was pretty much blind to any criticism: perfect UVA in perfect little Charlottesville where perfect students study. Needless to say, when I read about the murder of UVA lacrosse player Yeardley Love, allegedly by her ex-boyfriend George Huguely, I was stunned. How could such a brutal act happen in the idyllic “academical village” planned by Thomas Jefferson?

However, the more I thought and read about it, the more my sentiments began to match those of the many who asked, “Why should we be shocked?” The Justice Department reports that 85 percent of intimate partner violence is committed against women, most often those between the ages of 20 and 24. Moreover, UVA graduate Mary Beth Lineberry writes that in the past decade, more than 100 cases of dating abuse have been reported at the university, and that, “Love’s death exposes an unfortunate reality of college life that’s often obscured or silenced in communities.”

This is true not only on campuses but also in “the real world”: Talking about sexual violence, and specifically such violence perpetrated by intimate partners, is discouraged. The general attitude is to keep it to yourself, close your eyes and act like it never happened. The culture of silence around domestic violence is institutionalized because we allow it to be.

What I find appalling is that the University of Virginia, in the year 2010, in the aftermath of a student found face down in a pool of her own blood after having her head banged against the wall by her ex-boyfriend, is not taking the opportunity to shatter the silence. Many former and current UVA students are pointing out that the university not only isn’t taking necessary steps to protect women students, but also appears to be skirting the issue of domestic violence instead of confronting it.

This post by Amanda Hess in the Washington City Paper blasts the email sent out by UVA’s chief of police Mike Gibson, encouraging students in the aftermath of this tragedy to “never allow strangers to follow you into a locked building.” Hess rightly asks, “[If] police believe that Love was killed by a more likely suspect—a man she knew…why hasn’t UVA included any information here about domestic violence?”

Hess points out that despite the murder, students are not being given adequate information on how they can identify that they’re in an abusive relationship, the resources available to them at the university, or how to help friends in abusive relationships. She quotes a peer who says:

I just don’t understand why we can’t speak honestly about violence. . . . Locking your doors isn’t going to keep your boyfriend from hitting you.

The murder of Yeardley Love must not become just another statistic. It is a reminder and warning of what happens when we allow domestic violence to be swept under the rug. Academic institutions have the advantage of being able to turn a situation into an educational opportunity. Right now, UVA has a chance to educate its student body and its community about intimate partner violence. Creating awareness around an issue is often the best way to eliminate it.

Photo of University of Virginia campus from http://www.flickr.com/photos/koocbor/ / CC BY-SA 2.0.