Bad Shoes and the Author Who Takes Them On - Ms. Magazine
Skip to content 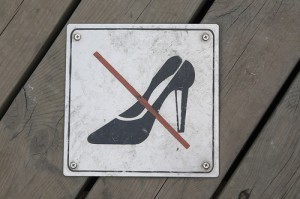 It happened in Milan at a 2008 Prada fashion show.  “I was having a panic attack, my hands were shaking,” a runway model recalls.  “Some of the girls were crying backstage, they were so scared.”  Why the dramatics—An Act of terrorism?  An explosion? Had the prime minister been assassinated? No. These women were fearful of walking down the runway in the season’s extremely high heels. Two models tripped and fell; they were helped to their feet by members of the audience. One was so badly shaken she went backstage and never emerged. The other finished her walk carrying her shoes and received a standing ovation.

So begins Leora Tannenbaum’s new book, Bad Shoes and the Women Who Love Them (Seven Stories Press). At once  fanciful (with illustrations by Vanessa Davis), disturbing, informative, understanding and preachy, it is a captivating attempt to address the reality that many women—including feminists– insist on wearing “sexy” shoes but need some ground rules for how not to wreck their feet in the process.

What’s really interesting about Tannenbaum’s approach is the artful way that she pulls you in, empathizes, withholds judgment, then stuns you with her analysis.

She does this at the end of the book, after romps through chapters on what you should know about your feet, on “toetox” (cosmetic surgery of the foot), on the history of high heels and on the sex life of women’s shoes. Then, after gaining a reader’s trust, she asks, ever so gently, that the reader consider the “many parallels we can draw between Chinese footbinding and Western women wearing high heels.”

Thus begins a bulleted list of nearly two pages that should give any woman pause. She writes:

In both cases, the foot is permanently deformed … a sexual fetish object is created, the practice is an assertion of femininity for the wearer and an affirmation of masculinity for the men, mobility is limited and the restrictive state regarded as sexually alluring … if a woman refuses to participate in the practice, she is regarded as deficient or deviant … the shoe is an instrument of illusion …women wearing high heels also display their feet to look as tiny as possible … and the paradox: In both cases, the practice proves that one is able to handle pain and exert a sense of control and discipline over her body, demonstrating a perverse kind of strength.

So will women listen to Tannenbaum’s practical advice?

Next to me at Tannenbaum’s May book launch at Tip Top Shoes on Manhattan’s Upper West Side is a young woman in a heel so high that a physiatrist next to me is literally agape. While the author is speaking, all of us in the line of sight of this young woman are gaping, too, at her Giuseppe Zanotti aqua-and-orange strappy stilettos, with the pointiest of toes. They belong in a craft museum, not on a woman’s foot.

“What’s the deal with those shoes?” I finally ask. She tells me she wore them to be provocative, she loves the way they look, but the reality is “There’s no way around it; they’re not comfortable.” Until Bad Shoes, she thought of bad feet as her mother’s problem. Now, she says, she’s willing to think about what could be in store for her feet down the road and to maybe cut back on wearing and walking in her Zannottis, admitting that the book was a conveyor of “news you don’t want to hear.”

As for Tannenbaum, practicing what she preaches, she wore a pair of Thierry Rabotins with a two-inch heel, rounded toe and black  sequins, considering them a compromise between the good and the “just a little bit ‘bad’” (i.e., sexy) shoe. She got them at Tip Top, where shoes run into the hundreds in price. Most women can’t afford footwear like that. But the mission of Tannenbaum’s little book is not taking on that matter of social inequality, or the reality that designers keep designing torture shoes, women’s magazines keep promoting them and celebrities—yes, including feminists—keep wearing them.

It’s a how-to book, after all, as in how to live with foot binding until the miracle happens and we all decide not to bind our own feet anymore.