This One’s For You, Anita Hill - Ms. Magazine
Skip to content 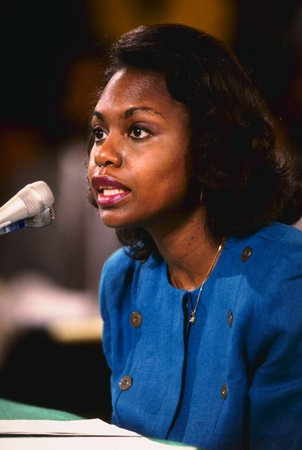 Marie Joseph Eugène Sue said it in 1841 (well before The Godfather): Revenge is very good eaten cold. And this week, it tasted particularly great washed down with champagne. It’s too bad it took nearly 20 years, but watching Arlen Specter go down to defeat was worth it.

This fight was personal. In early October, 1991, I was in Washington, D.C., working hard to stop the nomination of Clarence Thomas to the U.S. Supreme Court by the first George Bush. The Judiciary Committee hearings were over, and the Senate was set to vote on the nomination. But on Sunday, Oct. 6th, Newsday and NPR reported that Thomas had sexually harassed a woman whom he supervised, Anita Hill. The information came not from Hill directly, but from an FBI report.

By Monday, all hell began breaking loose. The Senate was determined to go forward with a vote on the nomination without hearing from Hill, but women were just as determined to have Hill testify. We jammed the telephone lines into the Senate and then the fax lines. We lobbied until the buildings reached capacity. Even more women gathered outside (where we were threatened with arrest for holding an “illegal demonstration”) and, in the most dramatic moment, seven congresswomen stormed the Senate to demand the Judiciary Committee reopen the hearings. The hearings were reopened.

Women all over the nation watched the three days and nights of hearings, as did I, but I was inside the hearing room the entire time with Ellie Smeal and Martha Burk. We saw firsthand the bad behavior of the Judiciary Committee members, both on and off camera. And the worst was Arlen Specter.

In the end, Specter and the Republicans won and Clarence Thomas joined the Supreme Court, becoming Justice Scalia’s second vote– a vote that is consistently cast to deny women’s rights.

The revulsion women felt nationwide while watching the hearings translated into action, and in 1992 (which the press dubbed the “Year of the Woman”), a historic number of women were elected to the Senate, bringing the total to a then-unprecedented six.

You could say that was the revenge appetizer. But over the years I wanted more, and I worked to defeat Specter. And every time he ran, Specter sold many Pennsylvanians his bill of goods that he was pro-choice and a great women’s rights supporter.

That is nonsense. Other than Robert Bork, Specter never met an anti-abortion Supreme Court nominee he didn’t like, and he cut-and-ran on so-called “partial birth abortion.” But the regular Democratic Party and the labor leaders in Pennsylvania found Specter a Republican they could like, and over the years never really backed his opponents.

But this year was different. Specter made a deal with the national Democrats to switch parties, give President Obama his vital 60th vote on the stimulus and health care, and in return they promised to give him a cakewalk to his next six-year term.

But they forgot about the grassroots Democrats like me. So as I cast my vote this week, I smiled and said to myself, “This one’s for you, Anita Hill. Sorry you had to wait so long.”

Video of Arlen Specter at the Anita Hill hearings in 1991:

Photo above from http://www.flickr.com/photos/httpoldmaisonblogspotcom/3883474825/in/photostream/ // CC BY 2.0