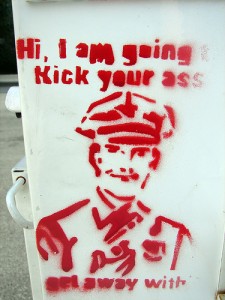 Recent stories of police violence are worrying. Working-class communities of color have worked for years to hold police accountable to protect and serve all citizens. But I often wonder whether the average patrol car on the street is there to protect me, or if it will transform into something like the Transformers Barricade Decepticon, whose charge is to punish and enslave.

Women and girls are often at the center of police violence. Take Aiyana Stanley Jones, the seven-year old African-American girl gunned down in her sleep May 16th by Detroit police. Officers used a flash bang device to enter her home in search of a suspect accused of killing a 17-year old boy. The device–which seems like excessive use of force for local law enforcement–temporarily disables targets by disrupting their hearing and vision. Detroit police reported that a scuffle ensued between an officer and Jones’s grandmother, and a gun was accidentally discharged. However, Geoffrey Fieger, attorney for the Jones family, disputes this claim. Footage captured by the film crew of the A&E reality series The First 48 allegedly shows police firing into the home before the flash bang discharged.

Another recent incident of police violence was the double-murder-suicide of Pierce County, Washington, sheriff deputy Allen Myron, who fatally shot his wife’s parents before killing himself. Tacoma police Detective Gretchen Aguirre claimed that there was no history of domestic violence in the Myron family. However, according to the Department of Justice, only 60 percent of family violence is reported to the police, with 19 percent of women reporting that fear of reprisal by the perpetrator is the reason for not reporting. According to the National Center for Women and Policing, 40 percent of police families experience domestic violence, compared to 10 percent in the general American population. The most common disciplinary action imposed on officers accused of domestic violence is counseling; termination is uncommon.

In Detroit, where Aiyana died, the police department has been under two court-ordered consent decrees since 2003 to resolve issues of police use of force on suspects. In the Myron case, Pierce County domestic violence organizations are also dealing with the repercussions of the 2003 murder-suicide of Tacoma Chief of Police David Brame.

When there are survivors that want to report an incident, they question, well, if the police can’t get it right, who can? If they do this, what’s going to happen to me?

Civilian review boards and community relations units may contribute to increased community accountability of police. We need to support organizations like INCITE! Women of Color Against Violence, the National Coalition Against Domestic Violence and Communities United Against Police Brutality.  They are making police violence visible and promoting tougher sanctions and better oversight.