Does Jillian Michaels Know What Fat is all About? - Ms. Magazine
Skip to content 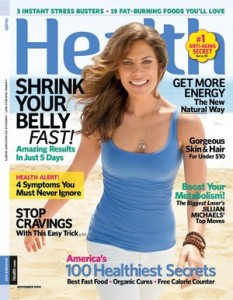 Physical trainer Jillian Michaels became a household name when the reality weight-loss show The Biggest Loser hit the airwaves, and now she’s adding to her resume with the new NBC show Losing It With Jillian, which debuts tonite.

Each week on Loser, viewers tune in to watch Michaels whip “fatties” into shape; in her new show she’ll help families “transform their lives inside and out.” She recently did an interview with Time magazine in which she was asked, “Is obesity about emotional trauma, bad genes or poor habits? Michaels responded:

You can be predisposed genetically, but it’s not a sentence. I’m genetically predisposed, but I manage my weight. The root of obesity, though, is usually emotional. The poor habits are a symptom of a deeper emotional issue.

Right, and of course she is all about helping the poor “fatties” by participating in a show that has proven to be unhealthy and dangerous.

“Whether it’s gallbladder disease, hair falling out, skin getting dry,” said Karen Kovach, the chief scientific officer at Weight Watchers, “the more rapid the weight loss, the greater the risk.” She added: “You get above a kilogram a week, the risk really shoots up.” The Biggest Loser promotes weight loss at any cost, thus leaving its contestants emotionally vulnerable. The problem is not the weight, but people like Michaels who, under the guise of helping, support the idea that fat people are less than.

I wanted to win so bad that the last ten days before the final weigh-in I didn’t eat one piece of solid food! If you’ve heard of “The Master Cleanse” that’s what I did. Its basically drinking lemonade made with water, fresh-squeezed lemon juice, pure maple syrup and cayenne pepper. The rules of the show said we couldn’t use any weight-loss drugs; well I didn’t take any drugs, I just starved myself! Twenty-four hours before the final weigh-in I stopped putting ANYTHING in my body, liquid or solid, then I started using some old high school wrestling tricks. I wore a rubber suit while jogging on the treadmill, and then spent a lot of time in the steam room. In the final 24 hours I probably dropped 10-13 lbs in just pure water weight. By the time of the final weigh-in I was peeing blood.”

She recently wrote on a blog that in the two weeks before the finale she severely dehydrated herself using asparagus (a diuretic), colonics and six-hour stretches of hopping in and out of a sauna. She lost 19 pounds, which as she joked, rebounded to her rear end almost immediately.

Considering that participation in The Biggest Loser is extremely risky, I fail to see how anything Jillian Michaels has to say about fat or weight loss is the least bit relevant. This woman is not really concerned, despite the fact that her inner-fat-child may be copiously weeping. She makes her living exploiting the self-loathing that many fat people negotiate the world with due to constant shaming.

Not every fat person is walking around with an eating disorder. The two biggest factors in weight are DNA and illness/disability. The latter is often ignored because it props up the myth that if one just does the right thing, health is a lifelong guarantee. People that are fat because of medications they take, lack of mobility or illness/disability are not emotionally sad and eating themselves into oblivion. I know this firsthand because I am fat and disabled. Despite the occasional craving for chocolate, my diet is healthy and balanced.

Jillian Michaels cannot afford to be honest about fat. She cannot afford to acknowledge connections like disability and fat, because to do so would conflict with the hateful message she promotes on the show. She is no different than a snake oil salesperson, selling people cures for illnesses they don’t even have. It is much healthier for people to maintain their weight and exercise moderately than to participate in the crash diet/exercise program she facilitates on The Biggest Loser.

It saddens me to know millions of people are tuning in every week, buying into the ridiculous notion that if they were only strong enough to exercise until they threw up, while tolerating international humiliation for being fat, they too could achieve an unrealistic body weight that is unsustainable. The only problem with fat people is that we live in a world that stigmatizes fat. The biggest losers are not the contestants but the staff that supports a dangerous diet for a quick buck.

Above: Cover- Jillian on Health Magazine. Photo Courtesy of Rockymountainhigh.