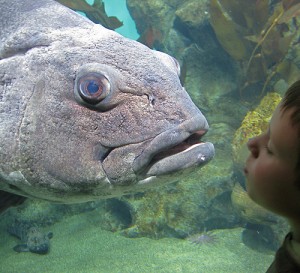 I’m not often amused by the antics of anti-choice activists. But hearing about their sudden conversion to environmentalism sent me into howls of laughter.

In a transparently opportunistic move, the American Life League and 26 other anti-choice groups announced their latest action, “Protest the Pill Day 2010: The Pill Kills the Environment.” They cite the presence of “intersex” fish (male fish with both male and female sex organs) in various areas of the world as evidence that birth control pills are killing our environment.

“How long will we stand by and ignore the fact that hormonal contraception wreaks havoc on our children, women’s health and the planet?” asked Judie Brown, president of American Life League. The American Life League is a Catholic organization that opposes all forms of contraception, as do many anti-choice groups. But now they think that gender-bending fish will be the hook that reels in environmentalists to their cause.

Of course they fail to mention other chemicals–called endocrine disruptors–that exist in these same waters, such as human and veterinary drugs (including antibiotics), non-prescription drugs, caffeine, detergents, disinfectants, plasticizers, fire retardants, insect repellants and antioxidants. They also fail to mention that these chemicals are found downstream of wastewater treatment plants.

I became curious about how committed the anti-choice movement is to the environment and human health so I looked at some pending legislation that would help clean up our water. Of particular relevance to the issue is the Endocrine Disruption Prevention Act of 2009 (HR 4190 and S 2828). Introduced by Rep. Jim Moran (D-VA) and Sen. John Kerry (D-Mass.), the bill would authorize the National Institute of Environmental Health Sciences to:

… conduct a research program on endocrine disruption, to prevent and reduce the production of, and exposure to, chemicals that can undermine the development of children before they are born and cause lifelong impairment to their health and function and for other purposes.

So far, all the co-sponsors are pro-choice Democrats. Yet supporting it would seem to be a natural for people who purport to be worried about fetuses, women, children and the environment.

“This issue affects human health and is a real crisis, that needs to be investigated,” said Emily Blout, spokesperson for Rep. Moran. She said she was surprised that anti-choice groups have chosen to focus on birth control pills when there are so many other chemicals released into our water supply that are potentially more harmful to human health. While Rep. Moran has reached out to anti-choice colleagues, hoping they would support this critical issue, he’s had no bites so far.

Another bill, HR 5320, introduced by Rep. Ed Markey (D-Mass.), would go a long way to ensure safe drinking water. The Assistance, Quality, and Affordability Act (AQUA, get it?) would be an important source of funding for U.S. public water systems that are dealing with aging infrastructure.

Rather than calling for 100 million women to abandon the birth control pill, anti-choice groups could be demonstrating a true concern for women, children, fetuses and the environment by lobbying their anti-choice legislators to get on board with efforts to clean up our water. Pro-choice activists, too, should contact legislators and urge them to pass Endocrine Disruption Prevention Act and AQUA. It’s about more than intersexed fish.