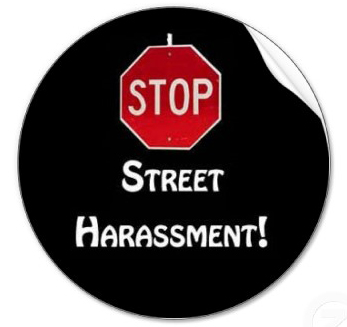 Last month, when I moved from Montana–a state with more cows than people–to Los Angeles, I steeled myself for culture shock. But what I wasn’t prepared for was the street harassment. Walking around my neighborhood trying to get my bearings, I felt besieged by creepy dudes. It seemed like everywhere I went, I heard “lookin’ good” and “hey, pretty lady.”

Sure, I’ve dealt with unwanted attention before. But for my first few days by myself in a giant, unfamiliar city, I felt really exposed and vulnerable. I am far from alone in this. Studies show that 80 to 100 percent of women report being harassed by a male stranger at some point in their lives. It happens everywhere and all the time, and it’s “okay” in our culture. Oldies stations play “Pretty Woman” and “Girl Watcher” which, if you listen, are really just songs dedicated to leering at women on the street.

So I was initially stoked when I saw Hey Baby, a new videogame based on retaliating at street harassment. Hey Baby is a FPS game (that’s First-Person Shooter for you non-gamers) designed by Suyin Looui, an interactive designer who’s tired of harassment.

Hey Baby is a simple game. You walk down the street, harassers appear and say icky things and you gun them down. The harasser-corpses freeze in blood-spattered positions of agony and a tombstone appears bearing their creepy phrase, such as “RIP, I Want To Lick You All Over.” It’s entertaining, but after playing for a few minutes you just feel a little bored. I agree with The Sexist’s assessment that it’s more of an interesting concept than a playable game.

I like the idea of stopping harassers in their tracks. On the other hand, blowing dudes to smithereens doesn’t exactly create a kinder world. So what is the socially conscious feminist solution to the street harassment problem? I usually respond to stranger harassment by ignoring it and walking away. Sometimes at a bar or concert a creeper will be really aggressive, and then I text a male friend, “Will you come guard me from this creepy dude?” Because of course, nobody harasses a woman who’s another man’s “territory.”

It makes me feel gross as a feminist, but what can I do?

Fortunately, several groups around the world have sprung up to deal with street harassment in non-violent ways. Hollaback is a blog started in 2005 that encourages women to, well, holla back when harassed. There are now Hollaback blogs around the world, including New York, Washington, D.C., Australia, the UK and the island of Mauritius. The blogs post stories and photos of harassment and link to legal advice and self-defense resources.

Stop Street Harassment also lists several studies about harassment. In one, Cheryl Benard and Edit Schlaffer actually interviewed 60 men who harassed them. “’The Man in the Street:’ Why He Harasses” reports that only 15 percent of the men said they intentionally wanted to humiliate and anger women. Most said they harassed out of boredom and male camaraderie. Society needs to teach men that making women uncomfortable should not be a casual pastime.

I haven’t noticed catcalls as much lately, maybe because I’m usually careening down the road on my bicycle. But I fully intend to be more assertive to harassers. I don’t have to take this crap, and neither does anyone else.