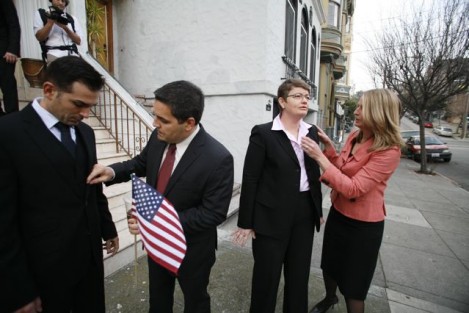 I want to marry Sandy. I want to have a stable and secure relationship with her that then we can include our children in. And I want the discrimination we are feeling with Proposition 8 to end and for a more positive, joyful part of our lives to begin.

This is how Kristin Perry, on Jan. 11, 2010, the first day of the federal trial challenging the constitutionality of California’s Proposition 8, explained her involvement in the case. She and her partner Sandra Stier, along with a gay male couple, are the lead plaintiffs in Perry v. Schwarzenegger, and this week they may be one step closer to achieving their hearts’ desires.

Closing arguments are set for Wed., June 16, and even though this part of the trial won’t be televised, you can follow along on the Courage Campaign’s Prop 8 Trial Tracker site and on FireDogLake, where live-bloggers will be posting updates as events unfold.

You can read the questions Judge Vaughn Walker has asked be addressed by both sides in closing arguments here.

Karen Ocamb at LGBT POV has posted the following schedule for the day’s hearing:

If you missed the 12 days of the trial itself back in January, transcripts are available here. To immerse yourself in the drama of this trial, check out the Prop 8 Trial Reenactments produced in protest to the Supreme Court’s ban on cameras in the courtroom during the trial. For even deeper immersion, you can submit a video reenacting a portion of the trial yourself, or view top submissions at the Courage Campaign’s Equality on Trial site.

I’ve written a couple of pieces that give a sense of what’s at stake in this trial. Here on the Ms. Blog I wrote about what the Prop 8 defenders are trying to hide; for the Huffington Post I wrote on why straight people should be paying close attention to this case (hint: it’s not just about “the gays”).

The New York Times published an op-ed last week on the case, taking a strong stand in favor of marriage equality, and Frank Rich’s column this past weekend, “Two Weddings, A Divorce and ‘Glee'” is a must-read.

There’s no way of knowing how long it will take the judge to reach a ruling in this case, but this Wednesday we’ll be able to follow another stage of history-in-the-making as this groundbreaking civil rights case moves closer to its conclusion. Let’s hope Kristin gets her wish!