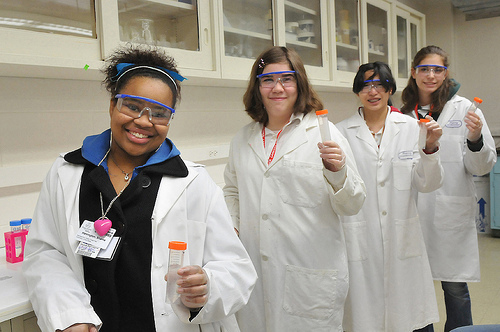 Tierney fancies himself a provocateur for rehashing tired, oft-disproved arguments that blame the under representation of women in science and math careers on biologically-based sex differences. He decided to reiterate such “daring” positions because of legislation recently passed by the House that would require the White House Science Adviser to convene “workshops to enhance gender equity,” at which participants would take part in “interactive discussions…that increase the awareness of the existence of gender bias.'”

Let me stop here to say that I fully support revolutionizing how we do workplace diversity training regarding gender, race, ethnic origin, sexuality or disabilities. Recent studies demonstrate what those of us who have been forced to undergo diversity training (or have watched the “Diversity Day” episode of The Office) have long known: day-long diversity seminars do little to change employee biases. If companies actually want to transform their workforces’ attitudes, they should, in the words of Princeton University assistant professor Elizabeth Levy Paluck, try:

…appointing special staff members and committees to rethink hiring and promotion structures or assigning responsibility for progress in terms of diversity to some of its existing employees rather than bringing people in for a day or less to talk about discrimination and bias and prejudice.

So I agree with Tierney on one point: Diversity training can be a waste of time. Unfortunately, his column does not stop there. He fondly reflects upon (and evidently agrees with) former Harvard President Larry Summers’s notion that even if social biases were eliminated, the science faculty at Ivy League schools like Harvard would still be predominantly men. Tierney then asks whether it would be “safe” at gender-equity workshops to “mention the new evidence supporting Dr. Summers’s controversial hypothesis about differences in the sexes’ aptitude for math and science.”

As our friends at Bitch have already noted, Tierney completely ignores years of research that demonstrates the cultural and class biases inherent in standardized tests. But he also cherry-picks quotes from the Duke study to support his point.

Tierney does note that SAT and ACT scores are not the only factor in determining why there are so few women on math and science faculties, acknowledging that “social bias” “may be a factor” working against women in science careers. Yet he neglects to mention the gender bias that operates against women years before they enter the job market. Even the Duke University researchers comment on this issue:

One of these non-cognitive factors may include stereotype or signaling threat (which I have written about here). The researchers also note that while there are more role models and teacher encouragement for girls interested in science and math than ever before, this problem has not been eliminated entirely, a point echoed by University of Chicago Professor Sian Bellock in her piece dismantling Tierney’s argument.

So it seems that everyone except Tierney agrees that social bias continues to play a significant role in deterring young women from math and science careers. Yet both the Duke study and Tierney fail to mention new research that illustrates how gender biases affect brain development in men and women from the day we are born.

Dr. Lise Eliot, a neuroscientist at the Chicago Medical School of Rosalind Franklin University of Medicine & Science, describes such research in her book Pink Brain Blue Brain. Comparing decades of studies on boys and girls’ brains, Dr. Eliot concludes that there is  “little solid evidence of sex differences in children’s brains.”

By adulthood, men and women’s brains are different, but most of these differences are not based in biology. They arise from how we are treated by society. Many sociological studies have shown that adults perceive and interact with children differently based on their gender. What makes Dr. Eliot’s research so groundbreaking is that she explains how this gender-based treatment permanently affects and alters children’s brains:

Infant brains are so malleable that small differences at birth become amplified over time, as parents, teachers, peers—and the culture at large—unwittingly reinforce gender stereotypes.”

Eliot’s research directly negates most of Tierney’s claims. For instance, Tierney writes, “Men are more interested in working with things, while women are more interested in working with people.” Certainly nature grants men and women slight biological differences, but Eliot’s research demonstrates that most gender-based traits arise from socialization and brain plasticity:

Boys are not, in fact, ‘better at math’ but at certain kinds of spatial reasoning. Girls are not naturally more empathetic than boys; just allowed to express their feelings more.

If John Tierney truly would “love to see more girls pursuing careers in science” and “more women reading science columns,” he should devote more time to exploring research like Dr. Eliot’s. Our society needs to change its expectations about girls’ behavior, about their likes and dislikes, and about their innate cognitive abilities. The more often nationally-recognized columnists like Tierney repeat tired, biased arguments about women in science and math, the less likely it is that women will continue to crack glass ceilings in these careers–and the less likely that any woman will want to read his science columns.