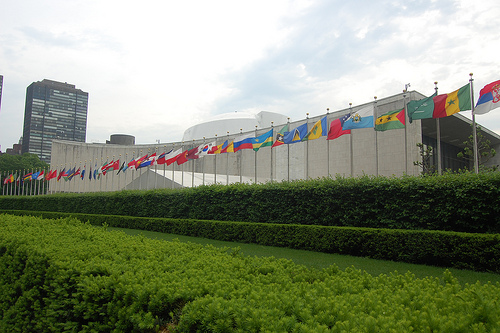 What do democracy activists in Iran, victims’ advocates in Mexico, teachers in Afghanistan, trade unionists in Latin America, journalists in Russia, HIV/AIDS workers in Uganda and lesbian and gay activists in Zimbabwe have in common with abortion providers in the United States? They’re all human rights defenders according to a new report by the Center for Reproductive Rights, which makes the connection between human rights defenders around the world and abortion providers here.

Director of the U.S. Legal Program at the Center for Reproductive Rights Cynthia Soohoo said:

We met with a human rights attorney and talked about similarities to attacks on human rights defenders all over the world. Abortion providers are facing increased threats of violence, undermining them, designed to scare them out of providing services. We decided to do a report talking about attacks that way.

The Obama administration is taking the focus on human rights very seriously. For the first time, the U.S. is participating in the UN’s Universal Periodic Review (UPR), which allows the UN to review the human rights records of all its member states.

As part of its preparation, the Department of State and other federal agencies received testimony from numerous organizations on the status of respect for human rights in the U.S. in preparation for the review in December.

[Abortion providers] are constant targets of hate crimes and actions of every kind. Abortion workers should be afforded the safety and protection that everyone who works for civil rights and human rights deserves. [Attacks on providers] also affects patients. We should help people recognize that deciding whether and when to bring a child into the world is a fundamental human right.

Soohoo said the U.S. has a long way to go on that score:

[There is] government complicity in the failure to protect women’s ability to access health care. I was astounded by the constant nature of the attacks and discriminatory legislation that affects abortion providers’ ability to provide services.

States don’t have to wait for the federal government to act. After the murder of Dr. George Tiller, New York state assemblyman Sam Hoyt introduced the Protections for Reproductive Health Care Act, which establishes enhanced penalties for those who cause injury to reproductive health care providers, staff and volunteers. New York Gov. David Paterson signed it into law, making the state the first to enact such protection for abortion providers.

While this law could serve as a model for other states, it’s unlikely that other state legislatures will enact it any time soon due to pressure from the anti-choice lobby. That’s why it’s important for the federal government to protect reproductive freedom by recognizing abortion providers as human rights defenders and taking affirmative steps to guarantee their safety.