We Love: Couric, Steinem, Greene Weigh In On "The End of Men" - Ms. Magazine
Skip to content 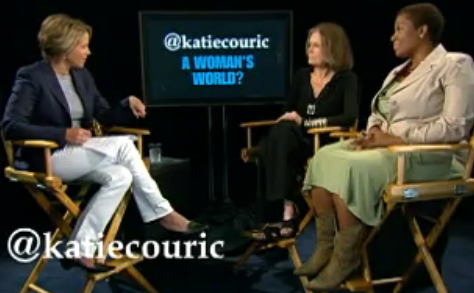 Yesterday, Ms. founder Gloria Steinem and Women’s Media Center President Jehmu Greene sat down on Katie Couric’s web show (video below) to respond to a The Atlantic article, “The End of Men: How women are taking control–of everything.” The article says:

For years, women’s progress has been cast as a struggle for equality. But what if equality isn’t the end point? What if modern, postindustrial society is simply better suited to women?

Hold your horses, reply Steinem and Greene, who point out that we still have a long way to go. Women currently make 78 cents to every dollar a man makes and Couric notes that the the U.S. has dropped to 69th place–behind Iraq and North Korea–in women’s representation in government. Is that really “taking control”? Nor, they say, do feminists seek domination–equality will be fine, thank you.

Steinem and Greene also address recent conflicts over the authenticity of “conservative feminists” such as Sarah Palin and Carly Fiorina. Steinem explains that it is essential for a person to support women’s reproductive choice to truly be a feminist:

What I found most heartening was the way Steinem and Greene defended my generation (watch: 27:00 minute mark). As a young feminist, I’ve been accused of apathy and of not understanding the struggle older feminists went through to give me the rights I enjoy today. But as Steinem points out, the misconception that young women don’t support their movement may lie in the word “feminist,” which has been successfully demonized by the right-wing. About 90 percent of young women say they support “the women’s movement,” versus about 70 percent of older women, says Steinem. Now, I believe it’s important to claim the F-word and not give in to right-wing propaganda, but it’s also important to recognize that young women do support our fight for our rights.

We may have grown up feeling more equal thanks to the feminists before us, but I don’t believe that weakens us as a generation. We go into the world expecting equality but are often confronted with the harsh reality of inequality. Being denied our expectations can be just as powerful as never having them to begin with.