Is She Too Independent? A Conversation with Author Laura Fraser - Ms. Magazine
Skip to content 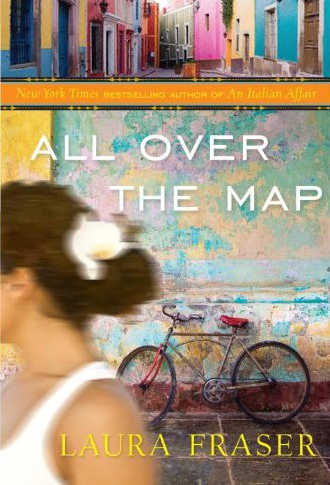 One might think that Laura Fraser’s new memoir, All Over the Map, is simply the next chapter in her  sensual globe-trotting experiences that began with her 2001 memoir An Italian Affair. San Francisco-based Fraser continues moving across continents, speaking to women who’ve survived the insurmountable, like ethnic cleansing in Rwanda and the sex trade in Italy. But the book’s meta-journey is a deeply internal one. It’s about love, but self-love. Divorced, without children, and age 40 now a faint shimmer in the rear-view mirror, Fraser began to wonder why women all too often find themselves asking something men probably rarely do: “Am I too independent?” The book traverses the territory of self-defined and self-reliant womanhood and explores our conflicted ideas about  independence.

Lynell George/Ms.: You dedicate this book to your mother, who became a strong symbol of independence for you. Of her four daughters, she chose you to be the one she would groom. What did she see in you ?

Laura Fraser: I  think it was because I was the youngest. She got to the point that it was “Come on!’ I’m just over this kids thing!” … and at the first possible opportunity, we had the sit-down, “You’re going to be independent.” And I remember thinking, “What did that big word mean?”

Ms.: What were her expectations?

Fraser: I was starting kindergarten [and] she wanted to go back to graduate school. She told me that she couldn’t be my room mother in kindergarten but we were going to school,  so we had that special relationship. She also got got involved with fair housing–it was at the time realtors wouldn’t sell to African Americans– and some other civil rights issues. She’d take me with her to meetings and demonstrations and that felt special. … Her participation in the community was an incredible model for me.

Ms.: After reflecting on the ways your mother pushed herself into the world, you turn the lens on yourself: “I on the other hand have no man in my life to say: Go ahead honey, be independent.”  It reflects an inner dissonance. You had your independence. Were you just wishing you had someone supportive, waiting for when you returned from your journeys?

Fraser: Yes. And I think that in some ways I always knew she had a desire for more independence than she could possibly ever have with four kids. But my father, to his great credit, always backed her up. She was an early feminist and he supported her pretty much all the way.

Ms.: We often say we’re “trying to build independent lives,” but often it’s some personally modified re-interpretation of the word? What do you think women are  puzzling through when they say they want to be independent?

Fraser: I think a sense of self-fulfillment. My mom had to drop out of school … and I know she felt that she could make much more of a contribution to the world, that  she could make a difference beyond raising children. That’s always been [my] goal as well, but I guess I’ve taken it further. I love to travel and that’s hard to do if you have a spouse and children. It can be done, but there’s always a push-me-pull-you with the sacrifice.  I’d sort of gone off in the extreme direction of independence. It’s so difficult for women to have a sense of stability in their careers, and often women  in their 30s and 40s who are single … you can tell that there is something out of sync, that there is some part of them that isn’t happy.  Yet oftentimes the ones that flagellate themselves the most are the mothers. There is a much more hyper-vigilant attitude among parents these days. No mother I know thinks she’s a good mother, and that’s terrible. It’s ridiculous that there’ve been so few accommodations in the workplace, particularly for mothers–but the crazy thing is is this is an old story.

Fraser: I think there is still a very deep-seeded ambivalence about choosing career over family. And wasn’t [justice David] Souter a bachelor? I don’t think he was criticized in the same way. Elena Kagan made choices. Kagan would not have gotten where she is today if she had chosen to have kids. She chose that kind of career. We have a lot of unresolved issues. There is a lot of envy and fear at work. I think women see a woman like that and it pisses them off, because they wonder “How did they do that?” They’re  frustrated because they know they can’t do everything  their male colleagues do. It’s still unequal.

Ms.: Even at this late date, we’re still asking: “Can we have everything?” What does “having it all” mean to you now?

Fraser: I think it has to do with some sense of acceptance about where my life was, what I actually had. At a certain place, whatever the social constraints are, ultimately you have to make peace with what your situation is . … There’s a certain point where  you do the inventory:  I didn’t own my own home, I wasn’t married, I didn’t have children. I paid a huge price for my independence. But then I had to turn it around: I had for years put my life on hold in a way, thinking, “Oh, I can’t buy a house for myself.” It felt so great when I finally got to the point that I understood that I was the one holding things up. Instead of beating myself up, I looked at what I  had: I travel a lot; I meet the most interesting people; I have the freedom to write. I’m not working as a toll-both collector. It was important to stop moving,  pause , and acknowledge that.

ABOVE: Book cover used with permission of the author.

Lynell George is a journalist/essayist based in Los Angeles. She is an assistant professor of English at Loyola Marymount University.