Is Lilith Fair Feminist? Sarah McLachlan's Not Sure - Ms. Magazine
Skip to content 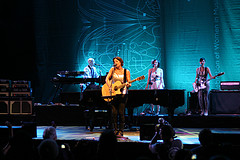 After a decade of silence, Sarah McLachlan rallied another troupe to make a nationwide pilgrimage in the name of the goddess Lilith. Not old enough to drive a car the last time Lilith Fair came around, I thought I had missed my opportunity forever back in 1999. Even so, McLachlan’s “Mirrorball” was the soundtrack to my teenage angst and I knew the collaborative Lilith version of the Indigo Girl’s “Closer to Fine” better than the original. I was thrilled to finally get my chance to witness the unifying and transformative event I already identified with, especially with a press pass.

Stopping in Los Angeles over the weekend, the latest installment of Lilith Fair showcased McLachlan, Emmylou Harris, Brandi Carlile, Miranda Lambert and Jenni Rivera–the first Mexican American headliner for the tour, not to mention the first Lilith Fair performer ever accompanied by a mariachi band. Before taking the main stage, the ladies of Lilith (minus Rivera) sat down for a late afternoon press conference where they discussed the challenges for women in the music industry–sexism, media imagery, even juggling motherhood and a career.

“What makes you feel beautiful?” one reporter asked the panel. 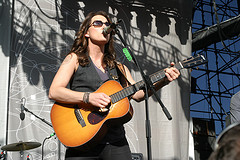 “Being counter-cultural and defying boundaries of gender,” said Carlile (left), the last to answer.

As a feminist, she was speaking my language. While the media had been scrutinizing  McLachlan’s feminist identity for years–“Is she, or isn’t she?”–I still believed that Lilith Fair was an act of resistance. Carlile’s feminist rhetoric seemed to naturally lead into the question I had come to ask: “Who here identifies as a feminist?”

I got a long pause, followed by nervous laughter.

Finally Carlile spoke, “I don’t know, it means something different that it used to.”

Before I could ask what it meant now as opposed to then, McLachlan assumed the role of official spokesperson and began building a mystery:

Not what I was expecting from the woman who founded Lilith Fair in 1997, a time not-so-long-ago when women musicians seldom crossed paths on the tour circuit because concert promoters wouldn’t put two on the same bill. McLachlan called the sexist policy “asinine” and began proving them wrong with her women-only festival. More than 10 years later, McLachlan seemed frightened of the F-word, equating it with “femininity”:

(Because I feel it is right I have made a personal decision to digress here and mention the sponsors’ tent city filled with “feminine” products, such as samples of Luna‘s nutrition bars and Degree deodorant’s new “body mists”. There were also “Lilipad” stations providing concert-goers a chance to “freshen up” with moist, scented towels. Once inside, Carefree liners, Stayfree pads and o.b. tampons were abundant and up for grabs. Even mini-issues of Self magazine were distributed.)

It’s more than just feminism. It’s gone above and beyond that now. At the same time … I have a great respect for the women who have gone before us, and who have had to struggle, and fight for every right ….

Were those of us who saw this as a feminist gathering mistaken? I wondered, as McLachlan went on to describe injustice in Iran, where women are stoned for adultery:

We all live in such a bubble here in North America. … When we look out on the rest of the world, the atrocities that are happening to women everyday, it’s shocking. So when I think about those things, it makes me want to be more of a staunch feminist. 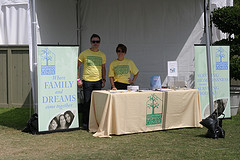 Even if McLachlan can’t quite bring herself to talk the I-am-a-feminist talk, Lilith Fair has long walked a feminist walk, lending it’s voice (and funds) to women in need. The 2010 incarnation stayed true to this principle, donating a portion of ticket sales to a local charity in each city. This time around, the Downtown Women’s Center (their festival booth is pictured at right) was the lucky recipient of $9,000 dollars to continue helping homeless women. Throughout the festival, awareness was raised for a variety of causes, including Race for the Cure and OXFAM International’s eco-feminist campaign  Sisters on the Planet. Said McLachlan:

I feel like this is such a great platform to talk about all those issues, without it becoming overtly feminist or that becoming the topic of everything, because this is a musical show. 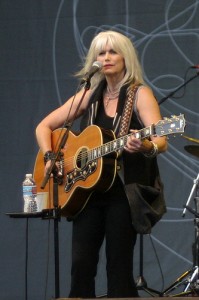 “Yeah, but just the fact that you got the idea …” started Emmylou Harris, leaving out the words  “… is feminist” that probably would have completed the sentence. Harris was quick to remind McLachlan that the passion of Lilith Fair was ignited by sex discrimination, plain and simple:

Of course you can’t put two women together. Of course they put two men on the same bill all the time. But it was accepted.  And Sarah just went up against that.”

McLachlan tip-toed around feminism like it was a sleeping lion. Despite her inability to be declarative, Lilith’s spirit of sisterhood felt as strong as ever, especially on stage. Carlile and Lambert teamed up to cover Patsy Cline’s “Crazy,” while Harris (right) harmonized with McLachlan on the latter’s hit song “Angel.” The finale was a group rendition of Patti Smith’s “Because the Night.”

And while McLachlan resists, I will still credit her with shaping my feminist adolescence, or at least being a part of it. Carlile confessed she attended every Lilith Fair as a teenager (playing her guitar in line and cheering from the lawn seats). In the end, feminist actions spoke louder than “post-feminist” words.

Photos by Ali Tweten.  For more Lilith Fair photos, check out our Flickr.