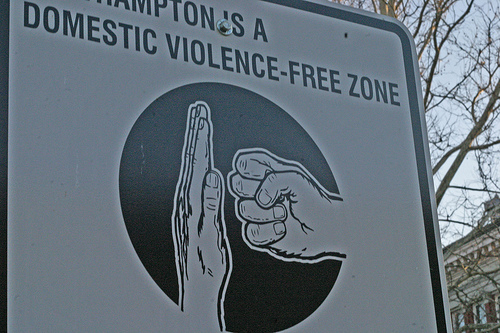 People on reality shows of yore have eaten bugs, had catfights over men and stabbed each other in the back for a chance to work for The Donald.

And now they beat their girlfriends.

Abusers is a new intervention-style reality show that depicts real-life cases of domestic violence and offers counseling and support for both the abuser and the victim. The show will be produced by Albert Harris, Jr., a former aide to ex-New Jersey Governor Jim McGreevey, and the creative team includes Ashley and Josh from The Real World: D.C., who both experienced domestic violence in their homes. Abusers and victims who participate on Abusers will be given free online degree programs through the University of Phoenix.

This could work for TV. It just has to be more PBS than Bravo, you know what I mean?

The producer, Harris, says he became interested in educating others about domestic violence because of his girlfriend Adrienne Mari’s experiences with an abuser. According to its press release, Abusers does not intend to sensationalize domestic abuse but instead …

…tackle the difficult and often taboo topic head on, featuring real-life cases of victims of all ages and backgrounds who have either experienced abuse, or are in relationships teetering on the brink of danger.

While I can appreciate addressing taboos, I will remain skeptical about Abusers until I see the finished product. It could go so very, very wrong. As with any reality show about serious, even deadly issues–Intervention, True Life, Hoarders, Taboo, etc. — the way each show handles the subject matter is highly nuanced. Despite best intentions, sensitive issues–and victims in distress–can be exploited anyway. Television really does not need another Cops.

So, to truly be a positive TV show, Abusers needs to be serious about educating viewers that domestic abuse is fundamentally an abuse of power. Domestic violence isn’t as simple as “she hit me” or “he strangled me;” there’s a lot of emotional manipulation inherent in intimate partner violence. It’s really a pattern of behavior, as you can see from this chart depicting the cycle of violence: calm, making up, tension-building and other incidents repeat over and over again. Stopping intimate partner violence is not just about “no more hitting.” It’s about no more abuses of power.

I also am curious how Abusers will handle the gender and age aspects of domestic violence. It is certainly true that domestic violence can involve all sorts of pairings in a family who are at all different ages: mom on dad, dad on mom, grandpa on grandson, brother on sister, etc. However, intimate partner violence involving male abusers (husbands, boyfriends, ex-boyfriends, etc.) is by far the most common. While any abuse of power in a relationship is deplorable, Abusers owes it to its viewers to honestly depict the state of intimate partner violence in this country. Eighty-five percent of reported domestic violence victims are women, according to statistics from the National Coalition Against Domestic Violence, and females are most at risk from ages 20 through 24. I hope Abusers doesn’t blur or obscure the facts about who reports abuse the most–young women–or else we as a society won’t obliterate the root causes (one of which I would say is sexism).

Judy McGuire at the Seattle Weekly’s blog brings up another good point: Aren’t abusers supposed to, like, be behind bars? “If a stranger walked up to me on the street and beat the crap out of me, he would go to jail (hopefully),” McGuire wrote. “But if my boyfriend did the same, he’d be offered counseling?”

As I said, I’m skeptical until I see the finished product. What are your thoughts on a show like Abusers?