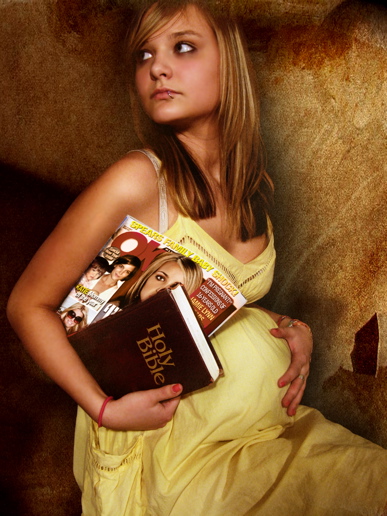 It doesn’t really matter whether discount clothing retailer Forever 21 is specifically targeting pregnant teens with their new trendy maternity line, Love 21 Maternity. With 65 percent of their clientele under the age of 24, the real issue here is the normalization of teen pregnancy.

The blogosphere has been awash with speculation about the company’s decision to launch Love 21 in Arizona, California, Texas, Alaska and Utah first, since the first three regions are among the country’s top 15 states with the highest rates of teen pregnancy, according to The National Campaign to Prevent Teen and Unplanned Pregnancy. However, the two states with the highest teen pregnancy rates, New Mexico and Nevada, won’t be getting the maternity line any time soon. Whatever their calculations, obviously  the corporation thinks there’s a market. But are trendy clothes what pregnant teens most need?

How about information on pregnancy options, counselling and pre- and post-natal care? Not trendy clothes. The U.S. ranks number one among industrialized nations for teen pregnancy, and just 12th worldwide for post-secondary degree completion. Linda Chang, Forever 21’s senior marketing manager, can claim they’re simply trying to appeal to a new demographic, and not exploiting the outrageously high number of teen moms with little money in the U.S., but the point is that a 20-something model in maternity clothes isn’t even shocking anymore. It’s an integral part of the “raw-capitalism-as-spectacle-a-go-go” model that F21 has founded its business on. It doesn’t matter who’s shopping, only that they’re buying.

Carol Doss, a family therapist, said of F21, “They’re there to try to sell to a certain market and the fact that there is that market there is not really their problem or their issue.” But as a company whose audience is made up mostly of girls under 24, Forever 21 has the option to behave responsibly and not perpetuate a very destructive norm. How about we offer proper sex ed to American youth? How about we talk about what it’s really like to be a mom–the money it takes, the time it takes, the effects on a young woman’s body–instead of making teen pregnancy a mere fact of life in the US with shows like 16 and Pregnant?

It’s too bad F21 prints bible verses on their shopping bags. It would be awesome to see baskets of free condoms in the Love 21 maternity section of every store instead.