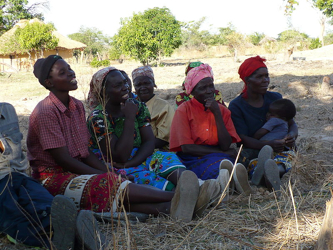 AFRICA: As Drew Hinshaw reports in “No Turning Back,” his piece in the summer Ms. issue, the adoption of parliamentary gender quotas in transitioning African governments has “changed southern and eastern Africa into regions unparalleled for women politicos.” In Zambia, though, electoral processes still limit the election of women. The Zambia National Women’s Lobby Group (ZNWL) is hoping to bring Zambia up to speed through their new campaign for equitable representation: “50 percent of women and men in leadership for equitable development.” The group has already had success with sensitization workshops, which aim to train would-be woman politicians in leadership skills.

Also in Africa, MTV is planning the second season of Shuga, a soap opera backed by Unicef and the U.S. President’s Emergency Plan for Aids Relief (Pepfar). The show is part of MTV’s Ignite campaign to fight HIV/AIDS, which involves social networking, counseling, and testing at organized screening. At first glance, Shuga seems like an ordinary soap: it follows the lives and loves of young Africans, yet simultaneously instills important lessons about the importance of HIV testing and safe sex. Watched by 60 percent of Kenyan youth, the show has been a massive success.

ENGLAND: Simultaneously breaking into two traditionally male fields–the military and museum leadership–Janice Murray will replace Alan Guy as head of the National Army Museum in London. Guy led the Museum for 33 years; Murray has most recently worked at the National Railway Museum.

FRANCE: Androgyny is in! French Vogue features a gender-bending spread of Lea T., a transsexual model. The profile implicitly questions what is ‘natural’; Lea poses in the nude, hand seductively placed over her unaltered genitals, gazing out over an Edenic setting.

THE WORLD WIDE WEB: Joining Murray in making inroads in the art world is the International Museum of Women (IMOW) in San Francisco, which announced that it received a grant from the American Association of Museums to fund an upcoming global online exhibition: Young Women Speaking the Economy. Befitting the international perspective, the Museum just announced that the show will be co-currated by Silvana Gesualdo (a museum consultant and art historian in Mexico City), Irene Jaievsky (a museum curator and stage designer from Buenos Aires), and Claudia Mandel (an art and art history professor from Costa Rica).