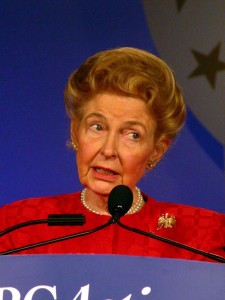 This weekend, Ms. rounds up the best of the blogosphere: Catch up on what you may have missed last week, including Elizabeth Hasselbeck’s theory on old lesbians, the web’s response to Essence magazine’s new white fashion editor, Phyllis Schlafly’s insight into contemporary American political and social trends, and more.

–The Box Turtle Bulletin reports that the public library system for Burlington County, N.J., has ordered that all copies of Amy Sonnie’s Revolutionary Voices: A Multicultural Queer Youth Anthology

, which the library director labeled as “child pornography,” be removed from library shelves, after an informal complaint was made by a member of a local chapter of Glenn Beck’s 9.12 Project. If you’d like to give Beck a piece of your mind and renew your Ms. subscription (or order a gift membership) at the same time, you can do so here.

–From Queerty: “Always the beacon of rationality, The View‘s shining star Elisabeth Hasselbeck this morning offered sociology’s secret explanation for why middle-aged women are going gay…” Queerty has the video of Hasselbeck’s emotional and strangely indignant contention that late-blooming lesbians are just out of options, as men of the same age are chasing younger women.

—“70 percent of unmarried women voted for Obama. And this is because when you kick your husband out, you’ve got to have Big Brother Government to be your provider.” – Phyllis Schlafly, ridiculous as ever, in a July 24 speech reminding us of what feminism is still up against. RH Reality Check has more.

At The Huffington Post, CV Harquil takes TED (Technology Entertainment and Design) to task after its recent announcement that it will hold a new separate conference for “women-centered ideas”. She argues, “Creating a special conference just for women demonstrates that TED organizers think that ‘women-centered ideas,’ whatever these might be, are somehow less interesting and less important than other ideas”

At Colorlines, Daisy Hernandez has a post about the Obama administration’s upsetting tendency to bow to anti-choicers when it comes to passing legislation like the health-insurance reform act. She admits to “feeling cheap after buying Obama’s abortion b.s.”

Finally, the blogosphere has been abuzz since Essence magazine made the controversial decision to hire a white fashion editor. Here are some highlights from Campus Progress, Colorlines, The Frisky and Feministe.

Above: Phyllis Schlafly in 2007 in Washington, DC at the Values Voters conference. Photo public domain, courtesy of Wikimedia Commons