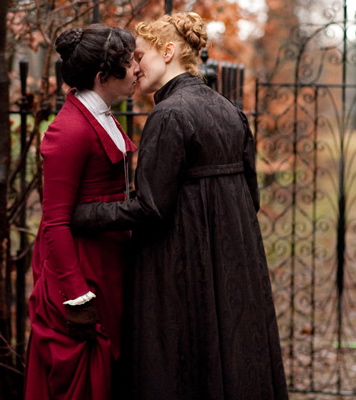 Who knew that Jane Austen had a kick-ass lesbian contemporary? Well, she did, and her name was Anne Lister. What’s more, she kept four million words worth of diaries, about a sixth of which were written in a code that took a century to crack. Now, 170 years after her death, Anne Lister’s diaries have been turned into a gorgeous and groundbreaking film. The Secret Diaries of Miss Anne Lister was shown for the first time to an American audience at this year’s Frameline, the San Francisco Gay and Lesbian Film Festival, after premiering on British television. I managed to catch a hold of the appropriately named Jane English, who wrote the film’s elegant script, in an effort to find out more about the extraordinary Anne Lister, the “first modern lesbian.”

Sarah Lohmann/Ms.: In The Secret Diaries of Miss Anne Lister, Anne Lister is portrayed as a woman who was very much ahead of her time.

Jane English: Oh, yes—there wasn’t an awful lot expected of women at the time, other than to get married and to produce children. And Anne Lister was in the unique position of inheriting an estate, which was quite rare. That gave her financial independence as well as a certain position in society. Beyond that, she really just had such a determined streak, which meant she was always going to live the life that she wanted to live—whether that was pursuing the women she loved, or business deals such as going into coal mining. And she really traveled widely—she climbed mountains in the Pyrenees, she traveled to Russia and lived in Paris for two years. She did so much, and I think a lot of that is obviously down to her financial ability—but also her sheer force of personality!

Ms.: And then there were her relationships with other women.

English: In terms of other women, she led a very radical life, and obviously didn’t marry, which was quite a radical thing at the time! She really pursued her love affairs with other women and ended up settling into what was, for all intents and purposes, a civil marriage with Ann Walker [a wealthy heiress]. In that sense, she was a very strong, radical woman—but in her diaries it becomes clear that she was also very “high church,” very conservative in her politics—she didn’t believe in the education of women, in furthering women’s rights, so in that sense she was very contradictory!

Ms.: That’s really quite surprising–why do you think she was against women’s rights?

English: I think that, if anything, she really identified with the social position of a man, and as a kind of mistress or master of her own estate.

Ms.: So, when she was talking about women’s rights, she didn’t really apply that to herself?

English: Exactly! She went to boarding school, but she was largely self-educated, and very rigorous. She read Greek and Latin, and if there was anything that she wanted to find out about, like, coal-mining, she would read everything, so the men couldn’t get one over on her. There’s a wonderful piece in the diaries where someone says to her, in order to provoke her: “I think education is wasted on women.” And she replies: “Oh, I quite agree with you!” She’s quite a contradictory character, which was one of the things that made her so interesting to read and write about.

Ms.: How did you get involved in the project?

English: You know, when I was being hired for the project, I read parts of Anne’s diaries, and one bit really captured my imagination, where Anne arranges this meeting in a Manchester hotel with Mariana Lawton, who was her married lover. I think the year is 1819. I just thought: “Hang on. These two women are meeting for illicit sex in a hotel—and this is the era of Jane Austen!” [laughs] So that was the first time I just thought: “Wow! I didn’t know that was all going on!” We’re so used to the genteel world represented in Jane Austen, aren’t we? And this projects a very different image of women at the time, as being 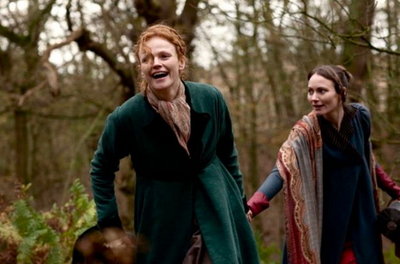 sexually voracious—or just as having a sexual appetite! I think that’s almost as radical as Anne’s lesbianism.

Ms.: It must have been hard for you to condense such a complex figure, whose diaries are four million words long, into a 90-minute film.

English: Oh, yes—but I didn’t read anything like four million words. I was working from the four published, edited versions of her diaries. It would be lovely if the film sparks an interest in those books! They’re a great read. Anne got involved in every aspect of life—business, politics, everything—it’s fascinating. I think the best starting point is I Know My Own Heart, edited by Helena Whitbread, the amazing woman who transcribed all four million words. So, that’s my main piece of advice: Go and read the diaries! If the film can raise awareness and generate more interest in taking another look at women from this period, that would be fantastic!

Ms.: Especially as Anne Lister is unlike anyone you learn about at school.

English: Absolutely! When I did this period of history in school, an era in which there was a lot of political reform in England, women just weren’t mentioned. They didn’t have the vote, they didn’t matter. And yet, while Anne Lister didn’t have the vote, she had 50 tenant farmers on her land whose vote she could influence! Anne got involved in politics and she had influence, and I suspect she wasn’t the only woman who did that. That’s what makes the diaries so interesting–plus, they’re so rich in wonderful social history. If you like history, and if you like strong women, the diaries are great. Full of surprises and great stories.

Ms.: I’m definitely going to read I Know My Own Heart!

English: Oh, you absolutely must! And then you can come back to me and go: “Well, where was that bit? And this bit? And you left out this whole scene!” [Laughs]

The Secret Diaries of Miss Anne Lister went on to win the award for best international feature at Outfest, the Los Angeles Gay and Lesbian Film Festival, and may be shown in limited theatrical release in the U.S. in the near future.