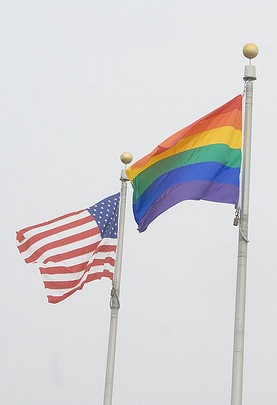 History never moves at lightning speed, but some days seem even longer than others. The wait today, for the judge’s ruling in the federal trial challenging the constitutionality of Prop 8, was agonizing. We learned yesterday that a decision had been reached and after what seemed like an eternity, shortly before 2 p.m. Pacific time, the Tweets, texts, posts, and cheers went out. Judge Vaughn Walker ruled that Proposition 8 is unconstitutional.

After reviewing the most extensive array of evidence ever presented in court on the history and meaning of marriage, Judge Walker concluded:

What the Prop 8 trial has made abundantly clear is that there are no legally sound justifications for any of the bans on same-sex marriage. The two main arguments advanced in the trial in support of the ban were that it is necessary to “protect” straight people’s marriages and to “channel” procreation into state-sanctioned heterosexual unions to ensure that children will be raised by their biological parents. Neither of these goals holds water.

The claim that same-sex marriages harm heterosexual ones is ludicrous. When attorney Charles Cooper was asked point-blank by the judge how gay marriage could possibly hurt heterosexual marriage, his answer was a weak, “I don’t know.”

The idea that the government can force married couples to bear and raise children is repugnant to the very ideals of democracy, and even the Prop 8 defenders conceded in closing arguments that excessive government interference in fertility testing and assigning marriage licenses only to those who are capable of bearing children would be excessively intrusive.

Notably absent from the proceedings were the real arguments made by opponents of same-sex marriage on the ground–at their rallies and in their campaign materials–that homosexuality is immoral and that religious doctrines sanction only heterosexual unions. These arguments could not be presented as evidence in court because in this country religious organizations are not allowed to discriminate against other individuals based on their particular belief system. As Judge Walker stated in his decision:

A state’s interest in an enactment must of course be secular in nature.The state does not have an interest in enforcing private moral or religious beliefs without an accompanying secular purpose….Perhaps recognizing that Proposition 8 must advance a secular purpose to be constitutional, proponents abandoned previous arguments from the campaign that had asserted the moral superiority of opposite-sex couples.

David Boies, the lawyer who, along with Ted Olson and a crack legal team, made the case to defeat Prop 8, wrote an op-ed anticipating this victory in the San Francisco Chronicle last Sunday:

Unable to defend Prop. 8 on the merits, defendants argued that it is protected from constitutional challenge because it was passed by 52 percent of California voters. But if we were prepared to leave minority rights up to a majority vote, there would be no need for a constitution – and many state laws discriminating based on race, sex and religion would plague us all.

In a press conference today, Olson declared, “This trial has helped to educate the people of the United States [about] the damage we have done to our citizens” by discriminating against gay and lesbian couples who wish to marry. Boies, at the same press conference, characterized such discrimination as anti-American.

Years from now, we will speak of Perry v. Schwarzenegger as the turning point in the fight for marriage equality. We will learn from and study this trial as a landmark case. You can find Judge Walker’s decision here. I plan to take time to digest its insights and will be blogging again tomorrow on the specifics of his statements and the lessons of this historic victory. And I also plan to celebrate–with my lawfully (here in California in July of ’08) wedded wife.