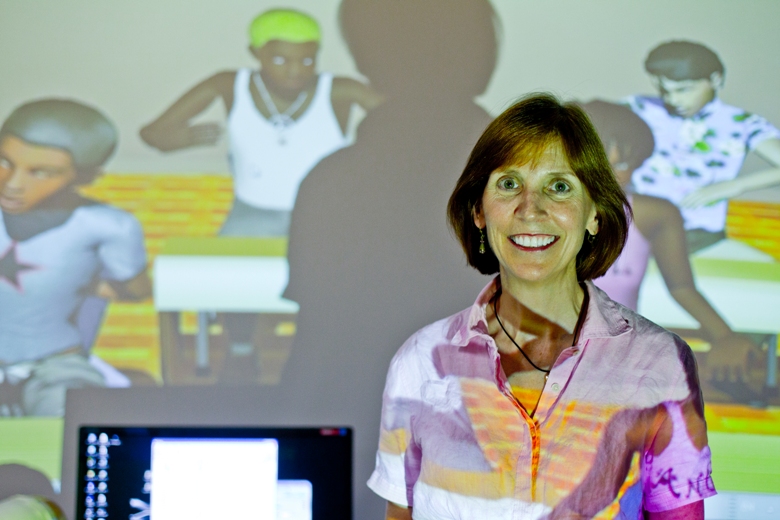 This sure sounds like fun: You’re a 14-year-old Latina girl and your teacher offers you a motion-control bodysuit and invites you to enter a virtual world. There are life size avatars with whom you’ll “interact.” Wow! But this game, designed to teach girls to handle unwelcome sexual advances and peer pressure, set the feminist blogosphere on fire, where it was derided as a high-tech, abstinence-only version of Nancy Reagan’s silly 1980s “Just Say No” anti-drug campaign.

I got curious. How could researchers at the University of Central Florida get a $434,800 grant from the National Institutes of Health for this program when the Obama administration had eliminated funding for abstinence-only education? And why is Fox News ridiculing an abstinence program? And, most worrisome, why am I agreeing with them? There must be more to this story.

After watching the virtual lynching of Shirley Sherrod, I decided to actually track down the women who developed the game before passing judgment.

The game is designed as part of an ‘Abstinence Plus’ program that is paired with a full sex education curriculum. It is really all about empowering middle school girls. If you want to delay onset of sex for girls who are likely to be sexually active, it’s not ‘Just Say No,’

said Anne Norris, PhD, UCF professor of nursing, the game developer. She and Charles Hughes, PhD, a UCF computer science professor, will work together with UCF’s Institute for Simulation & Training to roll out the project over the next two years.

That wasn’t my take-away from the coverage I saw on blogs. While I don’t know anyone who thinks a 14-year old (of any gender) should be having sex, except for a breakaway Mormon sect or the Taliban, I do believe we need to equip them to handle sexually-charged situations. So I think Norris is on to something, as long as it is part of a comprehensive sex education program (which she says it is). Furthermore, her research has shown that one size doesn’t fit all. She explains that middle-school students respond to different approaches:

Most sex education for middle school involves taking high school interventions and using them with middle school. That doesn’t work. In middle school, things are black and white. We want to deliver a clear message about how to say no, to resist pressure.

She is using some of the successful strategies in the field of drug and alcohol resistance and adapting them for middle schoolers.  Her goal is to empower girls and young women to resist peer pressure and “be strong and not cave in.”

But, how will a computer game give girls and young women the confidence to resist advances from older boys, or stand up to ridicule for not wanting to have sex? And will putting on a motion control suit and interacting with an avatar really translate to real life?

Turns out the reports I’d seen had it all wrong. You, teenage girl, are not in the motion capture body suit. Instead, a puppeteer (or “interactor”) at a console (often operating remotely) wears the suit and controls the avatars, which speak and respond to you. Says Norris, “It’s like sitting in a movie and the movie talks to you. You’re in it.”

A typical scenario may be that a friend is making fun of you for not wanting to go out with an older boy. If you doesn’t know how to respond, a friend (avatar) will appear and model a successful response. Presumably, “successful” means the subject will get peer points for being strong and cool. “It shows you how to be heard and stick with it–doing it with panache in middle school,” says Norris.

Panache in middle school–what I would have given for that! But, do we really need a computer game? What about plain, old-fashioned role-playing?

“If you role play, you have to do it in front of your friends,” said Norris. In this game, “You don’t have to worry about people laughing at you. It also doesn’t depend on how good the other person is at the role play. This is individualized.”

“It’s a new technology and we want to reach out to young people and do it in relevant ways. We can’t be afraid of virtual reality,” says Patrick Malone, Director of Communications for Sexuality Information and Education Council of the United States (SIECUS). “She and Charles Hughes’s research is on the cutting edge. It’s an innovative way to teach the subject area.”

If the game is successful for these girls, Norris plans to develop a similar game for boys and girls of other ethnicities. She wants to take this national. She envisions an “interactor” camp, where middle schoolers will not only play the game, but learn how to work the puppets and become ‘interactors’ in their community, making the interactions more relevant to their peers.

Norris and her team have a lot of work to do before it comes to that–and will need a lot more money. But, I think they have a fresh take on sex education and may just help young girls and women find their voice and make it heard.

As Patrick Malone said, “Every avatar has to start somewhere.”

Now, things are back in balance–I disagree with Fox News. I feel so much better.