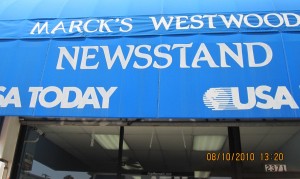 Having worked long hours to produce an issue we couldn’t be prouder of, we have been anxiously awaiting its newsstand debut. Now, that day has finally come! We were so excited, we decided to embark on an adventure around Los Angeles, seeking newsstands to see if the new issue had made it there. And it had!

The new issue of Ms. covers prominent women such as Elena Kagan, Alice Paul and Michelle Obama. Inside, we discuss: Is Mad Men feminist? How does a victim of statutory rape get labelled a felon? How are feminists changing the way we eat?

Also inside: a law column on the bizarre legal theory that lets domestic abusers get sole child custody (you won’t believe how often this happens), and a reporter goes on the ground to learn what’s being done to combat Uganda’s maternal mortality crisis.

So check out your local newsstands or Borders today, or become a member and get the latest Ms. issue delivered straight to your door!

Have you spotted Ms.? Post where you’ve seen the new Ms. in the comments section below and send in your Ms. SPOTTED photos to creed@msmagazine.com.

Having a hard time finding Ms.? Play around with this interactive map of all the newsstands in the world that carry Ms.! Zoom in to find the one closest to you!