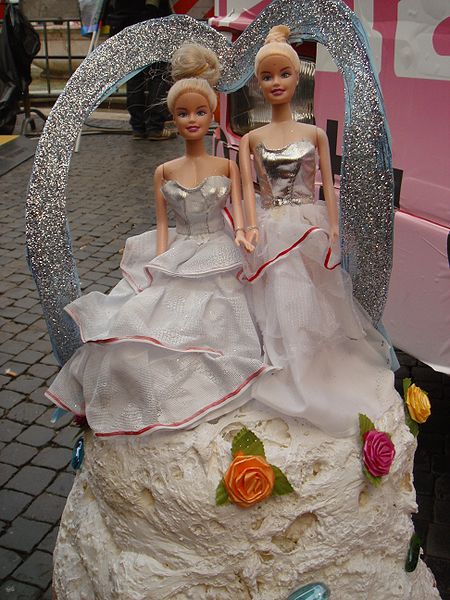 Just a little over a week after the historic decision to overturn California’s marriage ban was issued, crowds assembled once more today in front of the federal courthouse in San Francisco to await a decision from Judge Vaughn Walker on when gay marriages can resume. When his ruling came down (PDF), it was another victory for marriage equality. As of next Wednesday, August 18, 5:00 p.m., the state will be free once more to issue marriage licenses to same-gender couples.

Like last week’s ruling that emphatically declared Proposition 8 unconstitutional, Judge Walker’s decision today was clearly written and based on a transparent reading of the law and evidence. He states:

Because proponents fail to satisfy any of the factors necessary to warrant a stay, the court
denies a stay except for a limited time solely in order to permit the court of appeals to consider the issue in an orderly manner.

He devotes several pages to addressing each factor in turn (worth reading in full). Here is my summary of his findings:

Today’s ruling reiterates two key points made in the trial decision: Marriage is a fundamental right, and all evidence showed “that domestic partnership is an inadequate and discriminatory substitute for marriage.” To all of those moderate politicians who hope to mollify both sides by saying what, for example, President Obama says–that marriage is “between a man and a woman” (like some naughty bedroom secret), but that they support civil unions for same-sex couples–this trial has removed the fig leaf of phony tolerance.

Lou Cannon opined in the New York Times that 2010 candidates who wish to sidestep this issue may be placed in an uncomfortable position if a flood of same-sex marriages stirs a strong anti-gay backlash.

While an abstract legal ruling, subject to appeal, may not bring conservatives out in droves for a candidate they don’t see as a true believer, a rush of same-sex marriages–and news media images of gays and lesbians at these ceremonies–could bring a backlash at the polls in November.

He presumes that the sight of blissfully happy citizens exercising their equal rights will offend conservative voters. But what if he’s wrong? What if images of same-sex couples getting married don’t freak people out? Call me optimistic, but it’s possible that viewers might be won over by seeing representations of gays and lesbians associated with love and joy.

The truth is, most Americans–and many conservatives–don’t want the government telling them how to set up their households or arrange their daily lives. As the pro-Prop 8 legal team said in opposing the stay:

Suspending [these marriages would] prevent this Nation from fulfilling the founding principle of ‘equal human dignity’ and stop us from becoming “more American.”

The other side will appeal to block the marriages. But for now, we can celebrate the ongoing march of history toward a more just society–by, on August 18, striking up a “Wedding March.”