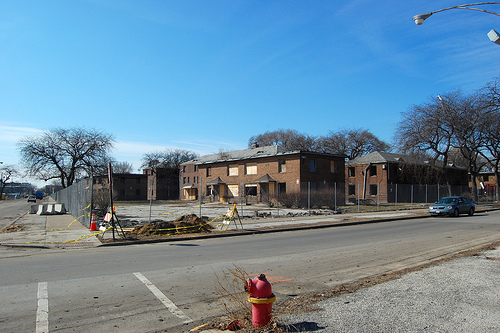 On Tuesday, 8-year-old Tanaja Stokes got caught in a storm of gunfire as she jumped rope outdoors on Chicago’s South Side. It was a typical crime story, but it was also an example of a sick kind of child mortality, one that doesn’t often come to mind when contemplating pool accidents, asthma attacks, and other “normal” childhood hazards.

As a recent California Endowment study on urban environment and health revealed, everyday violence falls on a continuum of trauma in the neighborhood environment, which could be seen as a collective epidemic.

And aside from bullets, there are many other ways life gets cut short in Chicago’s impoverished neighborhoods. This week, the Urban Institute posted a follow-up on a long-term study of former residents of the Madden/Wells housing complex in Chicago, which was shut down in 2008 as part of the Clinton-era Hope VI initiative. According to the latest round of health surveys, the community members, nearly all black women, who have been tracked since 2001, continue to struggle to move beyond an environment of poverty, even after being relocated. While the women of Madden/Wells had always suffered poor health overall, their problems gradually worsened to “stunning” levels in 2009.

In 2009, more than half (51 percent) of respondents identified their health as fair or poor, up from 37 percent in 2001. By comparison, just 13 percent of the general population reported fair or poor health; the figure for black women (who tend to be less healthy than average) is 20 percent.

Typical problems included stroke, obesity, hypertension and diabetes, as well as mental health problems like depression and anxiety. Many reported that they couldn’t stand on their feet for two straight hours. More than one in three residents said that “their physical health had interfered with their job or education in the previous year.”

Most resorted to a hospital or community clinic for medical care, deprived of a “medical home” with a regular doctor who could help them manage conditions like high blood pressure or asthma. The researchers couldn’t follow up with some of the respondents because they were dead. The mortality rate, 14 percent, was about twice that of the general population.

But there was one silver lining in the study: safety. After being moved into new public or private housing, residents reported that they generally felt much safer. The proportion who reported major problems with shootings and violence had dropped from nearly 70 percent to 12 percent since 2001. The better environment could influence mental health, too.

“I used to worry my ass off … in Madden/Wells about shooting,” said one mother in an interview. But these days, she continued, “I don’t worry and be all stressed out and you know, shaking all the time now. I’m relaxed. I’m calming down. I enjoy myself.”

Nonetheless, even in new, safer neighborhoods, residents were still troubled by violence, crime and economic hardship. And the fact that their health problems have persisted, even worsened, makes it clear that a rigid measure of safety does not mean these families are really safe from harm.

Maybe these women’s children face less risk of meeting the same fate as Tanaja Stokes did. But whether the problem is street violence or an environmental assault, years of collective suffering and trauma may leave families with scars that won’t ever heal.

Reprinted from ColorLines with permission. All rights reserved.