Who's Afraid of the Single Black Woman? - Ms. Magazine
Skip to content 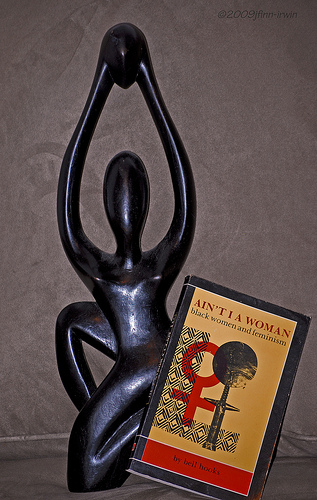 It was during one of those rainy Sunday afternoons–what I call my solitude time in the comfort of my home–that I discovered William Wyler’s 1949 movie The Heiress on TCM. I surf through my cable channels oh so delicately, lest I see another image berating my existence as a black woman. Movies of old rarely knew we existed, or thought we did so only as maids.

In this movie, there were no black characters–only a shy “plain Jane” heroine, Catherine Sloper (Olivia de Havilland), who bears the condescension of her father and suffers heartbreak after her fiancé, Morris Townsend (Montgomery Clift), deserts her when he learns that she will no longer inherit an immense fortune. Eventually, she does inherit this fortune, but when the lowlife Morris predictably returns, Catherine rejects him, much to the chagrin of her aunt, who thinks a loser husband is preferable to none at all.

Needless to say, as a single black woman in my 30s who is quite comfortable with her single status–and I am not the only one, despite what family, church, community, media and the rest of society has to say–I was exhilarated when Catherine bolted the door on Morris and nobly ascended the staircase, the lamp she held leading her to new found self-awareness and independence. We have yet to see duplicated in contemporary films women of any color making such bold choices in rejecting a man without replacing him first (gasp!). I was not that surprised, then, when I went online in search of commentary and criticism on this classic film, to discover present-day audiences lamenting that Catherine would forego marrying a man, no matter how worthless he was, for an unknown and perhaps unmarried future.

I would like to think that this is a sentiment shared only by a few members of our society who are invested in traditional notions of gender and marriage. Yet I find countless blog posts and commentaries lamenting the state of single women–black women in particular. Offline, this anxiety, or what Danielle Belton of The Black Snob blog calls “marriage panic,” reverberates in CNN special reports, in Essence magazine, from church pulpits, and at black public forums. Then there’s Helena Andrew’s recent memoir, Bitch is the New Black, which is being marketed as a black Sex and the City,” focusing on the endless woes of a single black woman.

Except we have been down this road before: Think Terry McMillan’s Waiting to Exhale back in the 90s. While The Heiress is set in the nineteenth century, I can’t help but think our contemporary “marriage panic” is grounded in similar Victorian concerns; it’s all so nuclear-family-oriented, so pre-sexual revolution. In a time when queer communities are fighting for same-sex marriage rights, black heterosexuals are wringing their hands over the presumed inability to access basic heterosexual marriage rights.

Again, this is not surprising considering how, historically, one of the first things freed slaves did–having suffered the pain of being separated from partners, children and relatives–was to marry and establish themselves as legitimate citizens. That queer communities are fighting for the same “legitimacy” today means that we as feminists should scrutinize how all those marginalized in society are shut out from marriage and the social, political and economic benefits that come with it.

When a white wealthy woman like the fictional Catherine Sloper rejects marriage, she is rejecting the patriarchal exchange of her father’s wealth to her would-be husband. Black women, who have traditionally not served in these exchanges, have had to generate their own income or struggle alongside men who did not have their own wealth.  Our romantic notions of marriage overlook these hard realities of economics, but when it is reduced to an issue of whether or not a woman is deemed “desirable” enough to be “legitimate” and to have “legitimate children,” it is not so easy an institution to reject for women who have historically been excluded from it and who have looked to the romance of marriage as a refuge from a racist, misogynist society.

But I’m reminded of something historian Paula Giddings once stated in her essay, “The Last Taboo,” included in the Race-ing Justice, En-gendering Power anthology: “Black women have not had a sexual revolution of our own.”

While class-privileged heterosexual white women were busy stepping down from pedestals that were off-limits to black women and reclaiming their sexuality with new found choices that came with birth control, black women were still battling stereotypes that undermined our status in the racialized beauty market–which still determines who is worth marrying, worth dating or simply worth humiliating through sexual acts of power. Despite “black is beautiful” rhetoric and Afro puffs from those liberation days, this was clearly not enough to dismantle the complex system of white capitalist and imperialist heteropatriarchy.

Fast forward to the new millennium, a time when more women and men in general are staying single for longer periods–some never marrying while others are divorcing or engaging in serial marriages. In fact, there are quite a number of single black men, too, but few media outlets have questioned the “problem of the single black man.” Is this because, unlike single women in general, single men can be viewed as having a fulfilling life outside of marriage?

Whether or not single black women represent the highest number of adult women outside of marriage, I can’t help but wonder why mainstream media conversations have turned the spotlight on us in particular. Black bloggers have weighed in: What About Our Daughters declares that it is mere media propaganda that promotes hatred of black women, while The Black Snob created a comical response: “How to Die Alone with all Fifteen of Your Cats,” to which some commentors have replied that they already started stocking up on their kitten supply.

Who knew that “spinster-shaming” would be back in vogue for the early 21st century?  Despite the stark statistics showing that black women have the poorest health care, the highest rates of STDs and HIV and have suffered harshly during the present economic crisis, most conversations about black women are focused on whether or not we are “desirable” and “pretty enough,” or if we are “too strong” for black men and other men outside our race. Worse, for those of us who have risen above the extreme racist misogyny that permeates our society to achieve educational and professional success, we are routinely chastised for daring to make these choices, for holding a job or buying that home on our own. How dare we show that we can make it on our own! How dare we have standards as to the kind of partner we wish to have!

So what does one do to a woman who refuses “her place” on the bottom of a racist misogynist society? Why, prey upon her insecurities as a woman! Tell her she’s not “pretty enough,” that she’s “too dark” or her hair “too kinky” or that her behind is too big!  Tell her she’s “too loud” and not “feminine” enough. But more than that: tell black women that we are essentially unmarriageable. And one doesn’t have to be single to hear these disparaging remarks. Even First Lady Michelle Obama isn’t spared such negative criticisms of her looks and behavior.

Fortunately, black women are resisting these representations and conversations. Nika Beamon’s I Didn’t Work This Hard Just to Get Married is one such work that dares to assert that some single black women have chosen this particular status rather than having it forced upon them. Writer and Feministing guest blogger Dani McClain suggests that this is an opportune time to challenge the exclusive socio-economic power of married heterosexual couples and to begin conversations with LGBTQ communities on redefining family and relationships.

We must reclaim our lives–single, married, heterosexual, queer–and resist narrow constructions of how we live that life and sustain love, family and community.  The late Audre Lorde said it best when she stated, “If we do not define ourselves for ourselves, we will be defined by others–for their use and to our detriment.”  If we rely on others to turn our lives into a “social pathology,” then we will miss the creative opportunity we now have to redefine our lives toward social possibility.