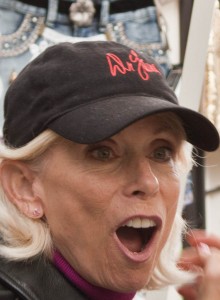 The weekend is here, and that can only mean one thing: It’s time for the Ms. blog roundup! We bring you the feminist must-reads for the week of August 15th, from Dr. Laura (left) to ill-conceived makeup to Rachel Maddow, to …

“What Mama Grizzly wouldn’t believe in school lunches, health insurance and quality childcare?”–Stacey Schiff, author of the forthcoming biography Cleopatra: A Life, talking to Gail Collins. Over on the Opinionator blog, the two grapple with a world in which anti-feminists such as Linda McMahon and Sarah Palin rise quickly to the top of the Tea Party, while films about strong, independent women dominate the box office.

In These Times implores readers to stand up for Elizabeth Warren.

Julie Zeilinger gives us an update on the status of the Haitian earthquake recovery. Not surprisingly, women continue to face violence, economic insecurity and inadequate healthcare. But they are also organizing. The Real Deal Blog has the story.

At Feministe, a celebration of the feminist blogosphere’s remarkable triumph over M.A.C.’s offensive Jaurez, Mexico-themed makeup collection. Feminist blogger Jessica Wakeman broke the story for The Frisky and a firestorm of opposition erupted. In a matter of days, M.A.C. canceled the line and announced that they would donate a portion of their proceeds to women and families in Juarez who have been victimized by violence. Thanks to all those who joined in the chorus of dissent; we’re reminded once again that sisterhood is powerful.

“The TV host, Rachel Maddow, is really the first acknowledged butch intellectual I’ve ever seen.” —Adrienne “AJ” Davis talks about an image of butchness that is rarely seen or recognized.

From That Minority Thing: “Dr. Blaque (sarcastically) Explains…Why Dr. Laura Was Right About Using the “N”-Word”.

And lastly, this week Sports Illustrated columnist Jeff Benedict proved himself to be an outlier among sports writers with his column entitled “A Double Standard When it Comes to Athletes and Domestic Violence.” Benedict’s indictment of a systematic failure to punish athletes for acts of violence against women is a refreshing departure from the way sports writers typically treat the subject of athlete abuse (the Roethlisberger case being just one example). We commend him.