Oscar Grant and LeBron James: What Would bell hooks Have Said? - Ms. Magazine
Skip to content 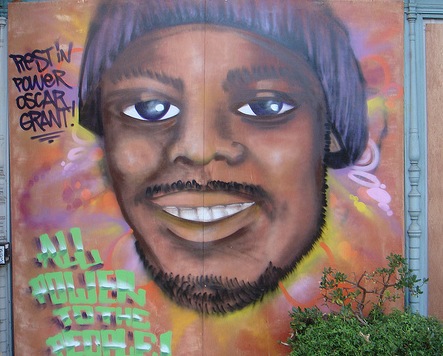 I thought about bell hooks on July 8 as basketball star LeBron James made the highly publicized announcement that he would be playing with the Miami Heat. That same day the verdict was read against Johannes Mehserle, the cop who shot and killed Oscar Grant, an unarmed young black man.

That day marked critical turning points in the narratives of two young black men who captured national attention for very different reasons. While James’ decision dominated the media, the coverage of Grant’s trial was decidedly sparse, a disparity that left me numb and questioning. Though the vast majority of young black men will never play in the NBA, a staggering amount will be prey to some type of policing in their life time. Right before our eyes, we saw the major attention given to black men as exceptional spectacles vs. the minor attention given black men as ordinary citizens.

I couldn’t help but fantasize about what would have happened had LeBron James worn a T-shirt of Oscar Grant to his press conference and addressed the verdict. The world would have indeed paid attention.

As the media celebrated LeBron James while simultaneously marginalizing Oscar Grant, I remembered bell hooks’ call for new models and fresh portrayals of black masculinity. Black manhood has been narrowly linked with criminality, violence, virility, and athleticism. The same narratives that foster the adulation of LeBron James also deemed Oscar Grant a threat, and his death a minor event.

This is a culture that does not love black males… How could they be expected to love, surrounded by so much envy, desire and hate?

It’s this “myth making”, she says, that has fueled many of the media narratives featuring black men. So in our efforts to create in young black boys and black men a feminist masculinity that can be reflected back in popular culture, we must be willing to battle the myths that prevent this from coming to fruition.

As my Ms. magazine blogging colleague Ebony Utley stated in her post this week, “hooks’ legacy is love.” Indeed it is. hooks critiques patriarchy for the damage it does to men and women. She critiques the feminist movement for too often dismissing intersectionality, particularly around issues of race. And she critiques black men’s willingness to settle into patriarchy rather than wrestle with it. But love buttresses all of her work, most powerfully her love of black men. Surely examples of feminist black manhood are available (think Professor Mark Anthony Neal) but these representations are often obscured in favor of the comfortable, recognizable myth-informed representations in popular culture. It’s time we all demanded a new model from our media.

Alito’s Draft Opinion Is a Blueprint for Rolling Back Civil Rights While Claiming To Protect Black Fetuses
Abortion on Our Own Terms: ‘Supreme Court Justices Can’t Put Abortion Pills Back in the Bottle’
Abortion Clinics’ Post-Roe Future: ‘We Will Be Forced to Close Our Doors Within 30 Days’