From the Stacks: Only Virgins Need Apply - Ms. Magazine
Skip to content 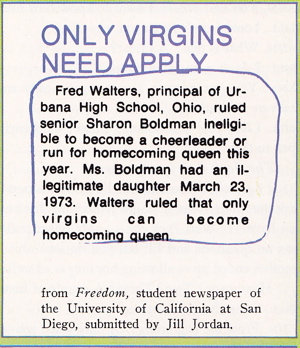 This charming little notice from UC San Diego appeared in the June 1974 No Comment section of Ms.

It’s outrageous to think that just 36 years ago non-virgins were banned from becoming homecoming queen. But have we really come that far?

At a Mississippi middle school, only white students were allowed to run for class president this year.

And the taboo of young women’s sexuality is certainly alive and well too: a woman student from Duke University whose “fuck list” went viral has been slut-shamed into apologizing for what young men do annually all over the U.S., without widespread stigmatization and shaming.

The rabid cultural fixation with virginity hasn’t simmered down either. Think back to the 22-year-old San Diego, Cal. woman who sold her virginity online for $3.8 million in 2009.

Is a “Virgins Only” ruling really so different?