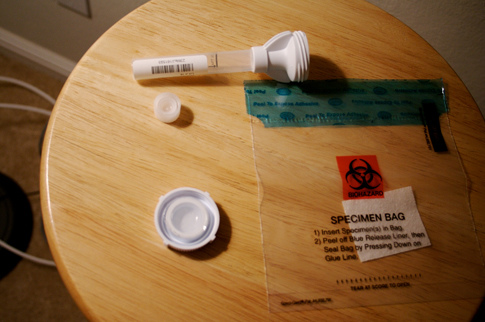 A woman is raped. Four times by the same man over a 15-year period. She is afraid to leave her home and hires people to do her shopping and all her outside chores. She works inside her apartment, which is locked up like a prison cell at San Quentin. She is the prisoner; terrorized, badly hurt and unable to stop the rapist, she has put herself in solitary confinement.

This is the beginning of last weeks’ episode of NBC’s Law and Order: SVU. The story goes on to give the viewers an unfiltered look at what a rape victim must go through if she is going to get justice–and very few rape victims do get justice. Rape is under-reported and difficult to prosecute, and law enforcement is often reluctant to bring cases to prosecutors since they will likely be thrown out.

What Mariska Hargitay and Neal Baer (star and showrunner of Law and Order: SVU) brought to the small screen is not just one woman’s rape story, but a much larger and current issue: the tragedy of rape-kit backlogs.

A rape kit is not a whistle, as one of my friends thought it was. It’s the evidence gathered after a rape, and gathering that evidence can be a trial in itself for the victimized woman. First, she must not shower, brush her teeth or change her clothes after being raped. Then, while still in shock and pain, she must submit herself to hours of probing (the heartbreak of which was effectively dramatized on SVU). Swabs are taken from the woman’s vagina, mouth and anus. Any piece of potential DNA evidence is scraped or lifted off of her and placed in her rape evidence kit.

In a perfect world … well, in a perfect world there would be no rape … but in the world as it is, rape evidence kits would be rushed immediately to forensic labs where technicians could test the DNA and upload the data to the FBI data bank known as CODIS (Combined DNA Indexing System). Law enforcement would then check that DNA against all the DNA taken from felons and stored in CODIS. They would hopefully find a match, and go arrest the rapist.

But as the episode of SVU pointed out, this is not what usually occurs. Instead, there are hundreds of thousands of untested rape evidence kits in the country. Although one in six U.S. women will be raped in her lifetime, the law enforcement system is not yet functioning well enough to get many of those rapists–who are often repeat offenders–off the streets.

For a short film I worked on, I was researching the rape kits that are sitting in storage and not being tested. Los Angeles County alone had more than 12,000 rape evidence kits sitting in freezers last year awaiting testing, and there are other large backlogs in such cities as Minneapolis, Chicago, Boston, Baltimore, Houston and Oakland. Some of these kits have been abandoned for so long, they can no longer be used against the rapist because the statute of limitations has passed.

The reasons for this frightening lag in crime investigation range from lack of funds for the relatively new DNA technology to lack of forensic technicians who know how to use the technology to under-equipped forensic labs. Throw in a reluctance to believe a woman when she says she has been raped and you understand the enormity of the challenge in bringing rapists to justice.

Eleanor Smeal, president of the Feminist Majority Foundation (and publisher of Ms.) recently testified in front of a U.S. Senate subcommittee investigating the problem. She offered even more chilling statistics to put into the rape kit story: approximately 91 percent of all rapes are committed by someone who has raped before. So if his DNA is safely tucked away in an untested rape kit, he can go on raping with impunity. Without the DNA in the rape kit, the woman has little to no chance of ever seeing her rapist brought to trial.

The survivors of rape who have the courage to subject themselves to evidence gathering deserve to know that rape kits will not sit in a freezer. They need to know that law enforcement and all levels of government will catch up with the available forensic technology. New York City had a backlog of 15,000 rape kits, but in four years they tested every kit by adding additional labs, outsourcing the tests and training more technicians. If New York can do it, so can Los Angeles and every other backlogged city.

So a big shout out to Mariska Hargitay and Neal Baer for bringing this issue to greater attention through the mass media of TV. We can’t catch rapists until we catch up on this shameful backlog of rape kits.

Six Things Feminists Should Know About the War on Drugs
The Ms. Q&A With Ani DiFranco: “You Have License To Be All the Aspects of Yourself and To Be Unashamed of Them”
Why Women Need the Paycheck Fairness Act