Cheerleader Required to Cheer for Man Who Assaulted Her - Ms. Magazine
Skip to content 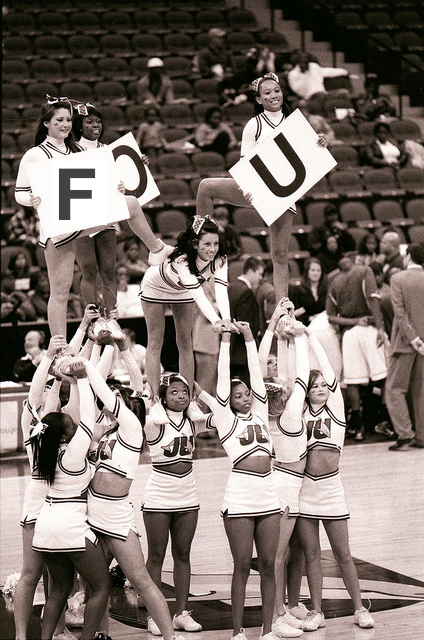 If someone assaulted you, would you want to then cheer for his performance on a basketball court? A 16-year-old Texas high school student sure didn’t.

High school football star Rakheem Bolton and two others were indicted for sexual assault of a child–identified only as H.S.–at a post-game party in 2008. According to H.S.–a fellow student and cheerleader at Silsbee High–Bolton, football player Christian Rountree and another juvenile male forced her into a room, locked the door, held her down and sexually assaulted her. When other party-goers tried to get into the room, two of the men fled through an open window, including Bolton, who left clothing behind. Bolton allegedly threatened to shoot the occupants of the house when the homeowner refused to return his clothes.

In September 2010, Bolton pled guilty to a lesser charge of Class A Assault and was sentenced to one year in prison, a sentence that was suspended by the judge in lieu of two years probation, a $2,500 fine, community service and an anger management course.

Silsbee school officials had two responses to the incident. First, they urged H.S. to keep a low profile, such as avoiding the school cafeteria and not taking part in homecoming activities. With the support of her family, she refused to do so, rejecting the notion that she had anything to be ashamed of. Secondly, school officials kicked her off the cheerleading squad for refusing to cheer for Bolton. No kidding.

Bolton had been allowed back on campus during a brief period when one grand jury withdrew the charges before another grand jury reinstated them. During a basketball game, H.S. cheered for the entire team but refused to cheer “Rakheem” during his free-throws, so she was off the squad.

H.S.’s parents sued the school for violating her right to free speech, but an appeals court dismissed her case earlier this month. The bizarre reasoning: “In her capacity as cheerleader, [she] served as a mouthpiece through which the school could disseminate speech–namely, support for its athletic teams.” Not cheering for Bolton “constituted substantial interference with the work of the school because, as a cheerleader, [she] was at the basketball game for the purpose of cheering, a position she undertook voluntarily.” In other words, the “work of the school” is basketball, and H.S. was obligated to put on a robotic smile and cheer for the man who had assaulted her.

Silsbee High School officials should be held accountable for their actions. Richard Bain, Jr., the superintendent of schools, allegedly ordered H.S. to cheer for her attacker. Why don’t you tell him what you think? You can contact Bain and the school’s new principal, Eldon Franco: