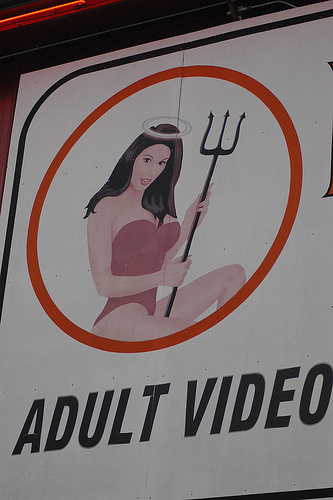 The Anti-Porn Men Project is a new “online space for (mainly) men to write about and discuss anti-porn issues.” And I really wanted to like it.

I also think that sex workers’ rights are incredibly important, and that they’re often violated by mainstream pornmakers. Recently, I published an interview with an independent fetish-porn producer who criticized big fetish-porn companies for unethical, non-consensual practices.

That’s why I wanted to like the Anti-Porn Men Project. In their first post, they write that they intend to be not just “a source and platform for people who wish to speak about and explore anti-porn arguments and views”, but “pro-sex.” To this they add:

But I got more and more uneasy as I looked around their site. For one thing, there isn’t a single sex-positive feminist or sex-positive resource on their list of resources. For another, there is no indication that they are aware of, or care about, sex workers who like their jobs, or the pragmatic concerns of sex workers who don’t want to quit but are agitating for better working conditions. And thirdly, the site includes a section on “porn addiction”. Addiction? Really? People keep using that phrase, but I do not think it means what they think it means. As  Licensed Marriage & Family Therapist and Certified Sex Therapist Marty Klein writes:

That was when I lost faith in the Anti-Porn Men Project. Because not only did Bjorn delete my response comment; he edited his own comment to remove his admission of being anti-BDSM.

I hope that the Anti-Porn Men Project will come to reconsider its current narrow focus, as well as the appropriateness of pulling the rug out from under commenters like myself. I’m all for critiques of pornography–really! I just hope to see them discussed in an intellectually honest and respectful way.

Clarisse Thorn is a feminist, sex-positive, pro-BDSM educator who has delivered sexuality lectures and workshops to a variety of audiences, including New York’s Museum of Sex, San Francisco’s Center for Sex and Culture, and a number of American universities. She created and curated the original Sex+++ sex-positive documentary film series at Chicago’s Jane Addams Hull-House Museum; she has also volunteered as an archivist, curator and fundraiser for that venerable BDSM institution, the Leather Archives & Museum. Clarisse recently returned from working on HIV mitigation in southern Africa. She writes about sexuality for a number of online venues; blogs at clarissethorn.wordpress.com; and Twitters @clarissethorn.