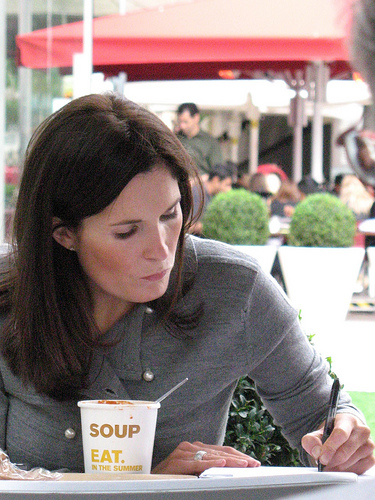 For Domestic Violence Awareness Month this past October, Deborah Siegel prompted the 12,000 members of SheWrites, an online community for women who write, to:

In 300 characters or less, narrate a nugget about a woman who survived. She may be your sister, your friend, the woman next door. She may be a character in your novel or a figment in your mind. She may be a woman in an existing work of literature or a song. She may be . . . you.

Siegel helped cofound the group with Kamy Wicoff just over a year ago with the goal of “merging the world of feminist activism and literary activity.” Members from all 50 states and 30 countries have taken part in literary feminism through such prompts as Wicoff’s “Mad Yet? Take part in our first-ever She Writes Day of Action!” and Siegel’s “Say It With Me: DIE, Literary Sexism, DIE.”

With the new, “I Will Survive” prompt, Siegel says,

I wanted to come up with something to honor Domestic Violence Awareness Month by using writing as a way of witnessing, truth-telling and healing. … I let [the stories] be intentionally anonymous when I was crafting the prompt. I think the ambiguity of whom the survivor is makes it the potential Every Woman. It contributed some safety and some flexibility.

It’s been a very popular SheWrites action, going viral on Twitter with the hashtag #IWS. The responses have been intimate, blunt and haunting. Here are some that struck me:

Pride is the man with the lovely wife who, as long as she obeys his every demand, feels all is well in the world. –Debra Kay Hannula

Eventually, I realized I was avoiding speaking unless spoken to and answering questions with anything definitive until I had a clear idea of what he wanted the answer to be. –Maria I. Kuroshchepova

Silence, when undertaken willingly can be good but it becomes abuse when one is told to shut up or worse yet that their words, their feelings are relegated to the heap of irrelevance by the one who wishes to silence you or just as bad, walks away while you are in mid-sentence. –Rosey Goodman

[S]he wrapped her naked bruised body in a bedspread and climbed out the window to freedom. –Julie Jeffs

It is as if introspection serves as a ceremonial ablution and through that ritual the chokehold of shame is rinsed clean and makes room for me to see that I am not a victim. … I can no longer stay quiet in this world, I have a voice and I feel it reverberate off my internal walls, making its slow climb upward until its melody can be heard all around. –Elin Stebbins Waldal (excerpt from the memoir Tornado Warning)

I guess I understand now where he learned all his cruelty. I’d like to say I’ve forgotten all about him, but I haven’t. I’m working through it though. –Sarah Martin Byrd (excerpt from the novel Guardian Spirit)

She survived because he died first. He was absolutely going to kill her one day, it was just a matter of time. –Marie

He wanted to beat her with words and gestures because it was…entertaining, thrilling, empowering. And she knew that indeed, he’d never loved her as a parent should–and that she would be … okay. –J. Johnson

i remember looking into the bathroom mirror
on my birthday a few years before
feeling sorry for myself
a target turned victim
i was the only one
seeing the woman who only i saw
–Kelly Fitzpatrick, from “The Day of the Fall”

Now I know I survived, I’d leave sooner. I’d still have had to start over, but there would have been more of me to start it. –Jennifer Shryock

After years and therapy and writing about it, I passed the story on. –Joyce Evans-Campbell

Read the rest here. And it’s not too late to contribute your own.