"Hands on the Freedom Plow": A Love Song to Ella Baker - Ms. Magazine
Skip to content 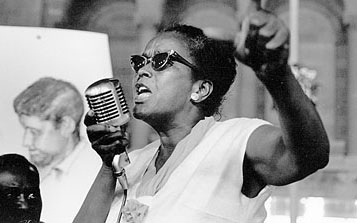 My “Introduction to Modern African-American History” professor began her first lecture on civil rights movement with the following instruction:

Raise your hand if you’ve heard of Ella Baker.

One student out of 45 raised her hand. The rest of us, myself included, turned to each other and shrugged while my professor shook her head in horror.

Thanks to that professor I now know a great deal about the woman credited with founding the Student Nonviolent Coordinating Committee (SNCC) in 1960. Ella Baker’s philosophy buoyed SNCC throughout the organization’s struggles in the deepest South. Her years of laboring for hierarchical, mainstream civil rights organizations taught her that radical social change had to begin at the grassroots. Because of Ella Baker and the students she mentored, SNCC was instrumental in dismantling the white, racist power structure in Southern politics and public life.

If Ella Baker was so invaluable to the most influential U.S. social movement in modern history, why have so few students heard her name? Why do so few Americans learn about the countless other women who dedicated their lives to the freedom struggle, while nearly all of us can list the civil rights movement’s men, from Andrew Young to Stokely Carmichael to, of course, Martin Luther King, Jr.?

Hands on the Freedom Plow: Personal Accounts by Women in SNCC does not answer these questions, but it does provide a much-needed antidote to this male-dominated history. It also negates the claim, made by many a historian by citing only Carmichael’s admittedly priggish comment–“The position of women in SNCC is prone”–that the organization was particularly sexist.

Most of the narratives in this invaluable collection proudly note that while an element of gender bias certainly existed in SNCC–its membership was raised in the 1950s, after all–the organization, especially in its pre-Carmichael days, did champion women leaders. Martha Prescod Norman Noonan, an African-American SNCC volunteer and one of the editors of this volume, says it best:

I had no sense of being mistreated as a woman. Even looking back through a contemporary prism of a sharpened gender consciousness, I still see that time as one of the most liberating experiences in my life and treasure working hand in hand, side by side with my brothers in struggle.

It seems that SNCC is the only civil rights organization described this way. Gloria Richardson Dandridge, a longtime SNCC organizer, recalled her disgust upon attending the 1963 March on Washington–a demonstration led by more mainstream civil rights groups such as the NAACP and the National Urban League. Before the March, an NAACP representative warned Dandridge that she had better dress the role of a proper lady: “It was not appropriate for me to wear jeans to the march instead of the hat, gloves, and dress they expected me to wear,” she recalled. Then, in the middle of the march, NAACP officials told Dandridge that she would had to leave early. Dandridge relates why:

They did this, I believe, because Lena Horne had had Rosa Parks by the hand and had been taking her to satellite broadcasts, saying, ‘This is who started the Civil Rights Movement, not Martin Luther King. This is the woman you need to interview.’ When I found Lena Horne doing that, I started helping her. … The march organizers must have found that out.

Indeed, Rosa Parks is probably the only woman American schoolchildren associate with the civil rights movement, but not because they understand her long history of activism, which stretched from her organizing around the 1931 Scottsboro case until her death in 2005. Most students do not learn that Parks’ 1943 investigation of a gang rape in Abbeville, Ala., led to the creation of activist African-American networks across the state–networks that came in handy when, in 1955, she refused to budge from her bus seat and led the African-American community to boycott Montgomery’s buses for an entire year.

The essays collected in Hands on the Freedom Plow demonstrate that the civil rights movement would have never gotten off the ground were it not for the activism of women like Parks and Baker. These two women, and those who relate their personal histories throughout the book, took the time to build and maintain relationships with African-American communities across the South. It was their social networks that led to the Freedom Rides, developed the Mississippi Freedom Democratic Party, desegregated lunch counters, registered voters and organized marches.

In every rural area where we worked, strong women in those communities would rise up like cream rising to the top. They were the force within their communities. People whose names never appeared in the national press or never had documentaries made about them were the people who started what we know now as the Civil Rights Movement.

As the Hands on the Freedom Plow editors note, “The organization that SNCC woman had been a part of was one in which they had been central figures. This was quite an unusual situation in the early sixties.” No other civil rights organization could have accomplished what SNCC did–but then again, no other one had Ella Baker at the helm.