Help Me Call On the Senate to Ratify CEDAW - Ms. Magazine
Skip to content 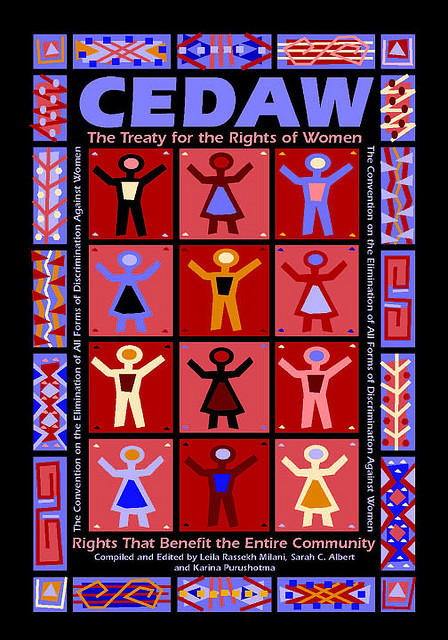 Today, for the first time in eight years, the U.S. Senate held a hearing on the importance of ratifying the Convention on the Elimination of All Forms of Discrimination Against Women (CEDAW). I was invited to submit my testimony; below is what I sent. Former Supreme Court Justice Sandra Day O’Conner, in a letter released today, also expressed support for CEDAW. You can join us in urging the Senate to support ratification of this vital treaty by sending your Senators an e-mail now.

Worldwide, women are struggling to secure equality and to achieve their full human rights. As the landmark international agreement for human rights and women’s equality, CEDAW holds up a blueprint that decision-makers in every country can use to measure their progress for women and girls. Where CEDAW has been ratified, women’s groups have used the treaty to encourage their governments to change discriminatory laws and policies.

After such efforts, Kuwait gave women the right to vote. Morocco and Jordan lifted “reservations” they had applied to CEDAW terms. Bangladesh broadened women’s access to education and job training; Kenya ended forced marriage and guaranteed inheritance rights to women.

In Afghanistan CEDAW has been especially important. The Feminist Majority Foundation has had a Campaign for Afghan Women and Girls [PDF] since 1997, first to end gender apartheid and then, after the fall of the Taliban, to help Afghan women and girls. Women’s organizations and women leaders have told FMF repeatedly that CEDAW has been essential in their drive to achieve full rights and freedom from violence and discrimination. One such effort led the government to approve a law targeting violence against women and declaring for the first time that rape is a crime. Another drive won revisions to the country’s Sharia law on families to allow women custody of children and to leave the house without a male relative’s permission.

These actions are critically important in Afghanistan. The U.S. effort to create a civil society there is premised on our certain knowledge that equal rights for women are fundamental to Afghanistan’s national security and economic growth. Yet some in Afghanistan question whether the United States is serious in its call for women’s rights because it has not even ratified CEDAW.

This stark fact that the United States has failed to ratify CEDAW compromises U.S. credibility worldwide as a leader in both human rights and women’s rights. Peace in Afghanistan should not be at women’s expense and their rights must not be bargained away, and U.S. ratification of CEDAW would strengthen our arguments to that effect. The treaty has been ratified by 186 of the 193 member nations of the United Nations. The other six holdouts places the United States with strange bedfellows of Iran, Sudan, and Somalia as well as the three small Pacific Island nations of Palau, Tonga and Nauru.

It is more than time for the United States to end this embarrassing situation and assume its rightful place as a global leader for women by ratifying CEDAW. It has long promised to do so: it is a signatory to the concluding documents of several gatherings that called for ratification, including the UN Conference on Human Rights in 1993, the Fourth World Conference on Women in 1995, and the Vienna/Helsinki agreements of the Organization on Security and Cooperation in Europe (OSCE). The Senate Foreign Relations Committee approved CEDAW in 2002, and the Obama administration has put it among its top ratification priorities. The time to act is now.

U.S. ratification of CEDAW would not only strengthen the United States as a global leader in defending the human rights of women and girls, it would strengthen our own claims of equal treatment for women at home. The Inter-Parliamentary Union ranks the United States # 73 among countries of the world in legislative representation for women and the World Economic Forum ranks United States #19 [PDF] in the overall degree of gender gap in status between men and women. Our levels of violence against women and girls remain unacceptably high, while laws to fight it are advancing one at a time in Congress, city by city, state by state. CEDAW would supply a universal standard by which new legislative proposals could be measured and women’s status improved.

The American public strongly supports the principles and values CEDAW affirms, including education, equality, fairness and basic rights. Similar agreements on race relations, torture and genocide were ratified under Presidents Reagan, Bush and Clinton. CEDAW terms are fully consistent with U.S. laws; the treaty would require no additional spending.

CEDAW ratification provides a framework upon which women worldwide can measure their own status against the global standard of equality. It is long past time for the United States to affirm that standard for U.S. women, for women in Afghanistan and for women worldwide. I urge you to approve CEDAW without delay.