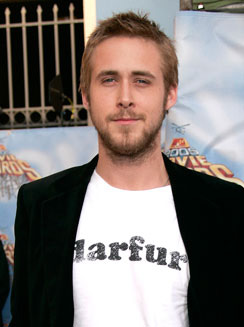 I think we can all agree that Ryan Gosling is ridiculously good looking. Beyond that he is supremely talented, starring in such films as “The Believer”, “The Notebook”, “Half Nelson” (which won him an Oscar nomination for his portrayal of an inner-city schoolteacher with a drug problem) and “Lars and the Real Girl” (a film with a seemingly creepy protagonist–a lonely young man who falls in love with a blow-up doll–that Gosling somehow made appealing). The actor brings emotional depth and sensitivity to all his roles, and we expect no less in his new film, “Blue Valentine”, an intimate portrayal of a couple as they fall in and out of love.

But that’s not why we heart him so much today. Rather, it’s because of this quote he gave in discussing Blue Valentine‘s NC-17 rating.

You have to question a cinematic culture which preaches artistic expression, and yet would support a decision that is clearly a product of a patriarchy-dominant society, which tries to control how women are depicted on screen. The MPAA is okay supporting scenes that portray women in scenarios of sexual torture and violence for entertainment purposes, but they are trying to force us to look away from a scene that shows a woman in a sexual scenario which is both complicit and complex. It’s misogynistic in nature to try and control a woman’s sexual presentation of self. I consider this an issue that is bigger than this film.

The MPAA, which rates films as a guide to who can see them in theaters, has been under fire lately because of their recent addition of “male nudity” as a ratings warning in three films this year. Female nudity,  in comparison, falls under the general “nudity” category–a distinction many see as sexist. “Blue Valentine” received its NC-17 because it contains a scene that seems to depict oral sex (oh, no!). That restrictive rating can spell commercial death for a movie, because it can limit the media that will advertise the film and the theaters that will show it.

Gosling’s co-star Michelle Williams has also spoken out against the NC-17 rating of “Blue Valentine”, and the film’s distributor, The Weinstein Company, will challenge the rating.

Meanwhile, we are dreamy-eyed over you, Ryan Gosling, because you are exactly what a feminist looks like.

Despite a History-Making Oscars, Women’s Underrepresentation Behind the Camera Persists

91 Other Nations Have Elected a Woman to the Highest Office. What About the U.S.?