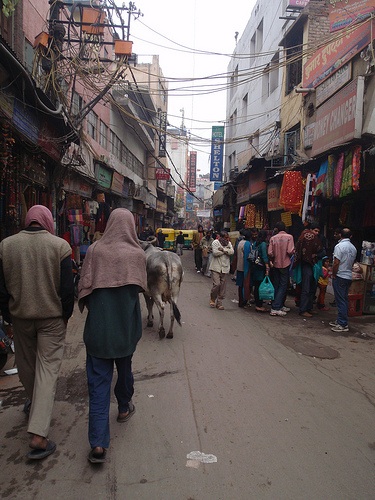 Traveling halfway around the world–or in my case, several hours east–can set the expectations for a conference rather high. When my friend and colleague Holly asked me to attend the Third International Conference on Women’s Safety: Building Inclusive Cities in New Delhi, it never occurred to me to say no.

But how can a group of academics, city planners, activists and NGO workers tackle issues as diverse as public toilets, illiteracy, migration, displacement and online activism in a bit less than 72 hours? Looking around the enthusiastic crowd at the closing ceremony last Wednesday night, it was clear that the hopeful organizers achieved exactly what they’d hoped over the three-day sprint.

Some of the most inspiring talks were given by those who this conference will hopefully benefit the most: poor women, women living in urban slums, women with disabilities, migrants, immigrants and refugee women. Nonetheless, women from these groups remained underrepresented as presenters, and weren’t present in nearly enough numbers in the meeting-room audiences. That’s not to say that people representing their interests weren’t present, but we all know there is no substitution for learning from real women about their own experiences. In the closing ceremony, it was also pointed out that law-enforcement officials were strikingly absent from a conference about safety in cities–either because they were not invited or did not attend.

Bharti Singh, a Delhi slum dweller from the Salia Sahi settlement in Bhubaneswar, the largest slum in Orissa, spoke on both days about how she became the first indigenous woman, and the first woman from an informal settlement, to secure a position in local government. Not only was Singh elected deputy mayor, but she won by the largest percentage of any other candidate. In Bhubaneswar, thanks to the efforts of women like her, evictions have been halted. Municipal workers and utilities have started coming to  the settlement. Singh’s husband, who drives one of Delhi’s ubiquitous auto rickshaws, has supported her efforts–despite her announcement that, “We have told the men they can leave. We can do this without them.”

Representing the Women with Disabilities Network in Papua New Guinea, Mary Ikupu spoke about the near-total lack of disability services and accessibility in her relatively young country. Since Papua New Guinea only gained independence 25 years ago, disability has been an invisible issue, exacerbated by high illiteracy rates. Living in Port Moresby, Ikupu says that she’s often asked to speak and advocate for her friends with disabilities because their illiteracy renders them helpless to fight the government and private sector for access to education, transit and businesses. Because of the stigma surrounding illness and disabilities, many disabled women have been abandoned by their families. Ikupu’s testimony was particularly striking because of its lack of statistics and formal figures: There is no data because there are no resources, even to document the experiences of women with disabilities.

As always, I was left with more questions than answers at the close of the conference. Why is increased urbanization–the result of our exploding global population–treated as inevitable? In a meeting already filled with divergent conversations and some tangential issues where violence and safety are concerned, where were discussions about population control or environmental destruction?

In one of the most inspiring and hands-on activities of the conference, we were asked to imagine and then draw the answer to this question: What does a safe, inclusive city look like? If you’re a cynic like me, it’s hard to imagine a world in which equality has been realized. Nevertheless, my group–which included Singh–drew bulldozers driving away from settlement neighborhoods, free public toilets and girls walking in the moonlight. I drew a garden and some well-cared-for animals living in it with me. Being surrounded by women like Singh and Ikupu for several days, even I could learn to have hope and dream of a better world.