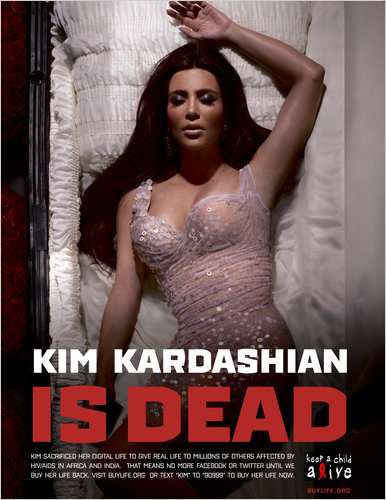 On December 1 – World AIDS Day – the unremitting babble on Twitter and Facebook will be a little bit quieter. On that day, a handful of celebrities will abstain from tweeting and posting to Facebook until $1 million has been donated to Keep a Child Alive, a group raising money for medical and social services for children and families in Africa and India affected by HIV/AIDS. As told in The New York Times this week, Alicia Keys, the organization’s co-founder, “caught [The New York Times‘] attention by harnessing fame to philanthropy in an innovative way.” According to the article, Keys “knows that she’s not alone in thinking that America increasingly treats its celebrities like commodities. But she believes she’s the first to tether that reality to technology to do some good.” As part of the publicity for the “Digital Death” campaign, “stylized full-color photographs of celebrities lying in coffins, seemingly lifeless, with eyes closed, are to be displayed on the Buy Life web site,” along with encouragements to the celebrities’ presumably distressed Twitter followers to donate money to “buy their lives back.”

The photo of Kim Kardashian, above, shows her lying “dead” in a coffin, wearing a sheer, sequined dress, face expertly made up, with one hand up above her head. I must say, my reaction to this campaign is one of pretty visceral distaste. This sexualization of death – making it glamorous and attractive – is purportedly meant for “grabbing [fans’] compassion” and compelling them to donate and, according to the organization’s co-founder, “‘taking the fixation with retail and with buying and all of that, and… turning it on its head.’” The whole thing feels like a publicity stunt to me and also an incredibly tactless trivialization of the AIDS epidemic and the very real death and suffering the disease has wrought. Although the campaign is, at the end of the day, for a good cause, I think the way the campaign is being marketed is insulting and suggestive of the degree to which some of these celebrities are blissfully unaware of issues that don’t center on themselves.

Donating to a charity, no matter how good the cause, can still be deeply problematic, especially if it consists of donating solely to be able to read the inane tweets and status updates of a handful of celebrities without working to foster any kind of substantive education, advocacy, or policy changes about HIV/AIDS. Although some people may argue that the ends justify the means, raising money by using this celebrity shtick has, I think, crossed a line of taste and respect. We may be able to “buy back” the digital lives of the celebrities shilling for Keep A Child Alive, but the victims of the AIDS epidemic aren’t nearly as lucky.

This post was originally published at The Daily Femme.

Photo of Kim Kardashian also found at found at The Daily Femme–to see who else is invovled in the campaign visit the Buy Life website.