Center for Reproductive Rights Takes FDA to Court on Plan B - Ms. Magazine
Skip to content 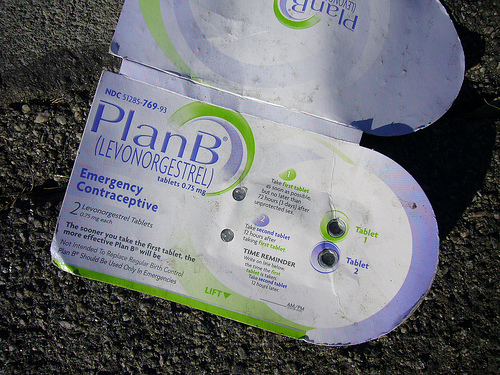 On November 16, the Center for Reproductive Rights filed a motion [PDF] accusing the Food and Drug Administration (FDA) of being in contempt for ignoring a year-old court order to end age restrictions on Emergency Contraception (EC). The March 2009 ruling, made by New York’s US District Court Judge Edward Korman, ordered the agency to make the EC pill, Plan B, available to 17-year-olds sans prescription, as well as review its policy to only allow women 18 and older to buy the pill without a prescription—a move, Korman said in his decision, that was a bend to Bush-era political and ideological pressure rather than based on scientific fact [PDF].

The Center, which first filed a lawsuit against the FDA in 2005 for failing to grant EC over-the-counter status, claims the agency is dragging its feet in making a final decision on the pill’s availability to those younger than 17 without a prescription. It’s an accusation with merit–according to The Washington Post, FDA spokesperson Karen Riley “reiterated” the FDA’s position: “The best way for the agency to comply with the court’s order,” she said, “is to review a supplemental drug application expected to be submitted by [Plan B’s manufacturer]“. But what exactly does the pill manufacturer, Teva Pharmeceuticals, have to submit when there’s already overwhelming scientific evidence [PDF] that shows emergency contraception as safe, effective, and not [PDF] harmful to adolescents?

It’s disheartening to know this delay is  happening under the Obama Administration and FDA Commissioner Margaret Hamburg’s leadership, considering both have declared that science, not ideology and politics, would play a heavier–if not only–role in US science policy and FDA decisions, respectively. But it just confirms my sneaking suspicion that, when it comes to women’s reproductive health in government, misogyny and misinformed moral beliefs rule (like easier access to Plan B will cause a spike in promiscuity among teenage girls). There are multiple reasons why a woman needs uninhibited access to EC at any age: she experiences a contraception fail during sexual intercourse; she faces health risks if she gets pregnant; she was sexually assaulted; or, more definitively, she just doesn’t want to be pregnant. The age and prescription-only restrictions on EC, as well as its placement behind pharmacy counters rather than in the contraceptives aisle, prevent women from accessing the pills with ease, deny them their fundamental right to reproductive self-determination, and further stigmatize women who may already feel some type of sexual shame or are undocumented. Yet, despite (altered) moral objections to condom-use, condoms come with no age or prescription restriction, are available in drug store aisles, and could be picked up and purchased without legal limitation. I am still not sure why that is but something tells me women are seen primarily as baby-making machines and any contraceptive that gives us the power to determine and alter “our purpose” has to be squashed.

Another important component of this EC debate are anti-choice claims that Emergency Contraception is equivalent to the abortion pill, mifepristone (previously known as RU-486). Taken within 72-120 hours after unprotected sex, the way in which the progestin-only EC prevents the onset of pregnancy is three-fold: 1. by delaying or inhibiting ovulation; 2. inhibiting fertilization; or 3. preventing the fertilized egg from adhering to the uterine wall, otherwise known as implantation.  According to the Washington Life Coalition, if the third preventive action occurs, the woman’s body “rejects the tiny baby, and he or she will die. This is called a chemical abortion. Abortion is an act of direct killing that takes the life of a tiny human being–a life that begins at fertilization.” In fact, EC is not effective when a woman is already pregnant, nor, unlike mifepristone, will it terminate an established pregnancy, which is medically defined as beginning at implantation.

It’s important to understand this definition for two reasons: 1. According to the 1997 Physiology of Implantation report [PDF] by T.G. Kennedy of The University of Western Ontario’s Departments of Physiology and Obstetrics & Gynecology, between 30 and 70 percent of embryos (otherwise known as “conceptuses”) are lost “before or at the time of implantation,” without the woman being aware of her pregnancy. Additionally, according to the New England Journal of Medicine, in order for an embryo to survive, it “must successfully” adhere to the uterine wall, as implantation allows the fetus to receive the needed oxygen, nutrients and hormones to grow.  2. A successful pregnancy can occur with in vitro fertilization (IVF), the process by which sperm fertilizes egg cells in a fluid medium outside the body which are then transferred to the woman’s uterus for implantation.  However, according to Kennedy’s study, there’s also a low implantation rate after embryo transfer in in vitro fertilization. While the causes of the low rate are still unknown, it’s believed that it may be due to either an “inherently low implantation rate in humans”  or “altered physiological state.” While a fetus’ development does begin with fertilization, not all fertilized eggs result in an established pregnancy, as proven by Kennedy. To define pregnancy by the point of fertilization and not implantation for the purpose of furthering anti-choice politics and religious agenda disregards both proven medical science and the different alternative processes, such as IVF, in which women seek to become pregnant.

The FDA needs to stop stonewalling and honor its agreement to reevaluate its restrictions on the accessibility and availability of emergency contraceptives. With such scientific evidence that proves EC is safe, there is no reason why there should be such a stronghold on this aspect of reproductive health. Further denying women of all ages the right to EC without prescriptions just goes to show that the FDA is still acting under Bush-era morality and politics, and not in the best interest of public health, which it’s meant to promote and protect.

This post was originally published at The Daily Femme.