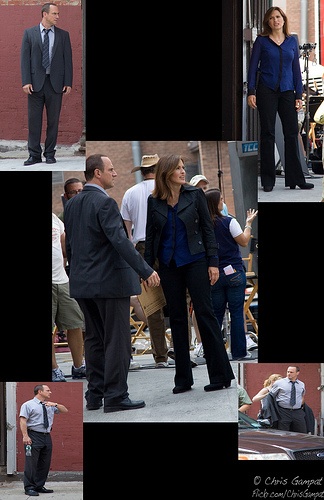 Three men are savagely sodomized and an insulting name burned onto their chests. Their attacker? The woman they raped years before, now out for revenge. … A teenage girl is raped by a stranger. He returns years later and rapes her again. She moves across country and goes into hiding, but the same stranger finds and rapes her yet again. … A woman mysteriously drops dead in the park after having questionably consensual sex with a stranger. The cause of her odd behavior and death? Rare, toxic mushroom poisoning…

And so goes this current season of Law & Order: Special Victims Unit (SVU) a show feminists can laud for its commitment to talking about rape and for bringing awareness to such important issues as the nation’s shameful amassing backlog of untested rape kits. I hate to chide those giving voice to the oft-silenced topic of sexual assault, but I’m afraid I must question the show’s recent narratives. Season Twelve’s far-fetched scenarios are so far removed from reality that they jeopardize some of our best efforts to raise awareness about sexual assault and increase survivors’ access to victims services. Instead, SVU is perpetuating our national delusion that rape is not a serious epidemic nor something likely to occur in our own lives.

In the two years I spent working as a volunteer advocate providing trauma counseling to rape victims in an emergency room, none of my cases packed the shock value one finds now in the stories on SVU. In fact, they were quite mundane compared to the TV series’ favored tales of poisoning, revenge, dark dungeons and religious cult rituals. The emergency room testimonials I was privy to–those quotidian, common experiences of rape–have not found their voice on SVU this season.

I am thinking, for example, of one teenage girl I met in the ER who had been raped by her sister’s boyfriend. He used verbal intimidation and his dominant strength to carry out the attack, but very little violence (apart from the rape, which itself is an act of violence). But she had no bruises, no cuts, no broken bones. And it was over in 10 minutes. There would be no subsequent trail leading detectives to uncover some egregious corporate scandal of grandiose proportions, an underground black market for selling babies, or some rare, poisonous concoction. But does that make this girl’s trauma any less worthy, less urgent, less heart-wrenching?

Not only are SVU’s cases strange anomalies, but often the detectives’ handling of the cases are rather absurd. In New York City, hospitals are legally prohibited from reporting a sexual assault to the police against the victim’s wishes (unless a weapon was used in the attack). Yet time and again on SVU, the detectives are called in without the victim’s permission. What is worse, even after a victim has turned them away, Detectives Olivia Benson (Mariska Hargitay) and Elliot Stabler (Christopher Meloni) will open an investigation, follow the victim to her home, park outside her front door and refuse to leave until she agrees to cooperate (such was their conduct in “Behave,” a Season Twelve episode featuring Jennifer Love Hewitt). This would be a gross breach of protocol real life, and this misrepresentation of reality is dangerous. How many victims will opt to stay home rather than seek medical treatment or counseling because television has them convinced that seeking help means having to report?

One might argue that in its twelfth season, SVU has had to throw more obstacles in the detectives’ paths or focus its narratives on the utterly bizarre and outrageous in order to keep its audience engaged. As SVU writer Daniel Truly recently told Jezebel readers,

I can imagine how viewers can get turned off by some of our twists–but I swear it’s only because we’re trying to keep the audience guessing!

Yes, a show needs new and compelling content to survive that long–but there are other ways. For example, SVU could add a new character (and, no, not just bring in a new actor for the ever-revolving role of assistant d.a.). May I suggest an emergency room advocate? Or better yet, instead of presenting a new scenario each week, SVU could offer a multiple-episode arc in which we watch the trauma unfold in a rape survivor’s life over time. These are but two ideas of what surely are many more.

SVU has been a pioneer on television for so long, admirably giving voice to an ignored epidemic–so thank you, longtime producer Neal Baer (who has just announced that he’s leaving the show). But it can do better than it has so far this season. According to the Rape, Abuse & Incest National Network (RAINN),  in the United States one in six women and one in 33 men will be victims of sexual assault in their lifetimes. If SVU would tell the real and all-too-ordinary stories of some of these people, maybe the show could make even more of a difference.

Karin Anderson is certified by the New York State Department of Health as a volunteer Advocate for victims of sexual assault and domestic violence. She served as an advocate for two years with The Crime Victims Treatment Center in New York City, providing trauma counseling in St. Luke’s and Roosevelt Hospitals’ emergency rooms. Karin is currently directing a documentary film about sexual assault. She holds a BA in Sociology and Spanish from Mount Holyoke College and is a graduate of New York City’s LaGuardia High School for the Performing Arts (better known as “the Fame school”), where she majored in Drama. She is currently in her fifth year as Director of Programs & Development for Exploring the Arts, a nonprofit organization supporting arts education in New York City public high schools.