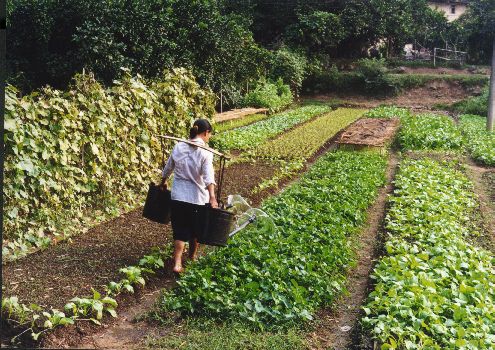 In hopes of picking up where the failed 2009 Copenhagen climate conference left off, international delegates have convened in Cancun, Mexico to work on a global plan to curb greenhouse gas emissions. On the agenda are target emissions caps and a climate assistance fund for poor nations. At the same time, women’s rights advocates are seizing the chance to make gender more visible on the climate map.

Last year’s Copenhagen conference was a deep disappointment for the climate justice movement. The failure of the U.S. and other “developed” nations to reach a concrete and legally-binding agreement on carbon emissions deepened the frustration of poorer nations and indigenous communities, who face an uphill battle to ensure that, as the people most vulnerable to carbon-induced disaster, they’re not shortchanged again by the politics of reducing worldwide emissions.

The social-environmental inequities facing women were one of the many special considerations raised and ultimately abandoned as the talks broke down.

In Cancun, the Global Gender and Climate Alliance, a coalition tied to gender-focused U.N. agencies like UNIFEM, hopes to confer with officials to build on the emerging discourse [PDF] on the intersection of gender, climate issues and social policy [PDF]. Women are both disproportionately affected by climate change and often cut out of the strategies to mitigate it–and thus, out of the potential economic benefits of green initiatives.

Since 2009, the Alliance urged international delegates to include women at each stage in crafting climate policy, including discussing gender-related problems and seeing women as part of the solution. Last year, UNIFEM climate change chief Inés Alberdi reminded COP 15 officials that the conversation starts and ends with women:

As providers of household needs, including fuel and water as well as food, women are on the front lines of climate change, and experience its impact most immediately. As farmers, entrepreneurs, managers of household resources, scientists and activists, they are also poised to drive positive change and contribute to a global response…. They understand that the longer an agreement is delayed, the more drastic the measures will have to be to address them, the more difficult they will be to take, and the less likely that the concerns of the most vulnerable will be viewed as priorities.

The GGCA agenda is founded on a few straightforward principles:

The social and environmental consequences of climate change for women are both acute and chronic: In the aftermath of a disaster, they may face greater risks of injury and diseases like diarrhoea. Overall, according to UNIFEM, “Women are up to 14 times more likely than men to die from natural disasters.” Systemic barriers like low education, a lack of emergency skills like swimming, and general poverty all conspire to leave women stranded when the next flood, hurricane or drought hits.

Sadly, countless poor rural women face even worse odds because they are primary caregivers for other household members. As a resource gatherer for her family, for instance, a girl in a barren combat zone may face risk of rape or assault each time she traverses an ever-longer distance to obtain water and firewood for her family.

Cancun may do little to push officials toward decisive action on climate change. But on the ground, women don’t need to be pushed to serve as defenders of their community habitats. Women are already doing the work of resource preservation and environmental protection–like the women of New Mexico who operate acequias (traditional water-sharing systems) to feed their communities during severe droughts. Seeking solutions to a seemingly intractable environmental crisis, governments ought to look to the women who’ve guarded the earth’s resources for ages–they just might hold the key.