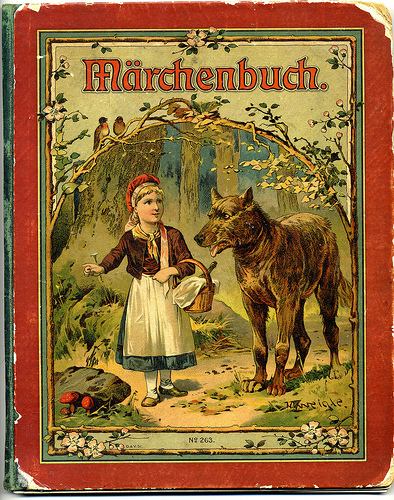 Who’s afraid of the Big Bad Wolf? Certainly not Little Red Riding Hood–at least not before Charles Perrault and the Brothers Grimm penned their literary versions of her story in the 17th and 19th centuries respectively. The original oral folktale that inspired them, entitled “The Story of Grandmother,” was at once more bizarre, more overtly sexual and much more feminist than the classic fairytale we know today.

With a new “dark and sexy” film adaptation of Little Red Riding Hood due out in March (from Twilight director Catherine Hardwicke), and Disney’s recent announcement that they will stop making animated films featuring fairy tale princesses, classic fairy tales have become a hot topic lately among my fellow children’s librarians. Meanwhile, as usual during the holiday season at the library where I work, patrons are asking us to recommend fairy tales that would make especially nice gifts: gifts almost always intended for little girls. Consequently, several of us are revisiting the socializing messages we see in these tales and asking: How do fairytales influence children’s ideas about gender? Do they encourage girls to identify with passive princesses, valued mainly for their beauty, obedience, and ability to win a prince? (Would we have the show Bridalplasty without them?) Are these stories popular because they contain timeless universals and archetypes? Or, do they merely perpetuate an oppressive patriarchal discourse from centuries ago?

Before answering such questions, let’s return to the example of Little Red Riding Hood. How did Perrault and the Brothers Grimm revise the original tale? In his book, Don’t Bet on the Prince, feminist literary critic Jack Zipes details how this tale transformed over time:

1) In The Story of Grandmother, the young girl is not saved by a woodcutter. Instead, she outsmarts the wolf herself. Conversely, in Perrault’s 1697 version, the wolf eats both the grandmother and the girl! Perrault ends by cautioning young girls to beware of strangers. In 1812, the Brothers Grimm then added a character they felt was lacking–a heroic male–hence the woodcutter who rescues her.

2) In The Story of Grandmother, the wolf is a “bzou” or werewolf, and the suggestion of rape is fairly overt. Consequently, the girl’s ability to handle the situation is more overt as well. The werewolf entreats her to throw all her clothing into the fire and come into bed with him. She protests, saying that she has to go outside to defecate. When he reluctantly lets her out with a rope tied around her ankle, she ties this rope around a tree and runs safely home.

3) In The Story of Grandmother, there is no admonition to stay on the path. At a fork in the road, the girl chooses, “the path of needles” over “the path of pins.” Perrault added the idea that she foolishly gives the wolf the information he needs to arrive at her grandmother’s cottage first. The Grimms further added a mother who warns her not to deviate from the straight path through the forest–a warning she ignores. Arguably, these revisions suggest that she is somehow at fault for what follows, symbolically implicating her in the wolf’s attempted rape.

4) In The Story of Grandmother, there is no hooded red cloak! Perrault added this garment, renaming his tale “Le Petit Chaperon Rouge.” In literature, red is often the color associated with sin and carnality. Later, the Grimms’ specified that the cloak was velvet and that she never wished to wear anything else. This luxurious, red velvet cloak casts her as a sensual creature who might be seeking a forbidden type of attention.

Mon Dieu! Gott in Himmel! What can it mean that French and German gentlemen, centuries ago, altered the fate of our young hooded heroine so drastically? Jack Zipes, in his book Fairy Tales and the Art of Subversion, provides an historical overview:

In the late 17th century, Perrault collected oral tales told by the French peasantry, but revised them for a different audience–the literate bourgeoisie and aristocrats. Consequently, he tailored his tales to educate upper-class children about the rigid rules of conduct in vogue at this time, rules that were especially restrictive for women. Perrault’s stories flourished until the French Revolution temporarily returned the country to a working class sensibility.

In the 19th century, The Brothers Grimm revived many of Perrault’s stories, revising them even further to mesh with Victorian attitudes by editing out some of the elements that might disturb their more conservative readership. (For example, they eliminated a bit where the girl drinks the Grandmother’s blood which the wolf has poured into a wine bottle) As in Perrault’s tales, the Grimm’s protagonists exemplified the differing cultural expectations for men and for women. As Zipes states, “..the Grimm” tales …served a socialization process that placed great emphasis on passivity, industry, and self-sacrifice for girls and on activity, competition and accumulation of wealth for boys.”

Before reading Zipes, I subscribed to the wisdom of Bruno Bettelheim, Freudian literary critic and author of The Uses of Enchantment. Like Bettelheim, I believed that classic fairytales contained timeless truths that helped children work through universal psychosexual anxieties. From Bettelheim’s perspective, Hansel and Gretel is all about separation anxiety, Jack and the Beanstalk deals with castration anxiety and Little Red Riding Hood revolves around oedipal issues.

At work I wondered if I was seeing evidence for Bettelheim’s views when parents would request cute, peaceful stories for their children, but the children would repeatedly beg for more exciting fairytale fare, replete with giants, dragons and witches. Something about these stories continually drew children in. Admittedly, I felt skeptical about alternative fairytales that might disrupt the time-tested elements in the “original” stories I knew. I was leery of retellings that might somehow sound like the parodies in James Finn Garner’s Politically Correct Bedtime Stories. ( In his Red Riding Hood, the wolf, “unhampered by rigid, traditionalist notions of what was masculine or feminine, put on Grandma’s nightclothes and crawled into bed. Red Riding Hood entered the cottage and said, ‘Grandma, I have brought you some fat-free sodium-free snacks to salute you in your role of a wise, nurturing matriarch.’ “)

After reading Zipes, however, I realized that the fairy tales I knew were not timeless texts but themselves revisions, altered by changes that, intentionally or not, served an agenda stemming from a specific time and place. While I still believe, with Bettelheim, that fairy tales are full of compelling psychosexual material, I no longer naively toss around the terms, “universal” and “archetypal.” Rather, I see the psychological subtexts in these works as fascinating signposts pointing the way back to a determined cultural point of view. Feminist counter narratives now seem only fair, considering that classic fairy tales often evolved from earlier, more female-friendly traditions.

As a librarian committed to intellectual freedom, I would never suggest discarding stories that fail to reflect a 21st century sensibility. Nor will I slap warnings on classic fairytales that read: “Caution– these stories may be insidious instruments of male hegemony!” Instead, I favor letting a diverse collection make whatever case it will for itself. The more access children have to multiple perspectives, the more opportunity they will have to engage in critical questioning and to choose the types of narratives that speak to them. In this spirit, I offer the following selection of alternative fairy tales with a feminist twist:

Cinder Edna by Ellen Jackson, illustrated by Kevin O’Malley. Cinderella’s next-door neighbor, the vivacious Cinder Edna, also lives with a wicked stepmother and stepsisters but manages to find a prince who shares her many interests and makes her much happier than Cinderella’s boring prince makes her.

Rumpelstiltskin’s Daughter, by Diane Stanley. In this retelling of Rumpelstiltskin, the miller’s daughter does not wish to marry the King who forced her to spin straw into gold. Instead, she proposes to the kindly Rumpelstiltskin who helped her. Their clever daughter, Hope grows up to foil the plans of the greedy king to make her spin more gold and ultimately is appointed Prime Minister by an adoring public.

Dealing with Dragons (Enchanted Forest Chronicles Series, #1), by Patricia Werde. Independent-minded Princess Cimorene does not wish to drop all her exciting hobbies to learn how to become a proper young lady, so she runs away to intentionally be captured by a dragon. Now if she can only convince the Prince not to rescue her.

The Sisters Grimm: The Fairy Tale Detectives (Book #1), by Michael Buckley.  In this fun, fractured meta-fiction, two sisters discover that they are the descendents of the Brothers Grimm and that the fairy tale creatures the Grimms wrote about were not only real but still exist and are in need of their help.

The Runaway Princess, by Kate Coombs. Fifteen-year-old Princess Meg has been locked up in a tower because she objects to her father’s plan to marry her off to any prince who can defeat the kingdom’s dragon, witch and roving bandits. The dragon is a baby, the witch is sympathetic, the bandits steal from the rich and give to the poor. Fortunately Meg knows how to fend for herself and turn lots of fairy tale conventions upside down as she does.

The Rose and the Beast: Fairy Tales Retold, by Francesca Lia Block. Eloquent, edgy and for the oldest end of the YA spectrum, these nine fairytales are reset in contemporary times and deal with very dark, modern issues. Sleeping Beauty pricks her finger on a heroine needle, Bluebeard is a serial killer and the Wolf in Red Riding Hood is a molester and wife beater.

Book of a Thousand Days, by Shannon Hale. When Lady Saren is locked in a tower for seven years after refusing to marry a man she hates, her maidservant, 15-year-old Dashti, is locked up with her. In this retelling of a relatively obscure Grimm’s tale, relocated on the Asian steppes, Dashti ultimately finds her voice and saves the day through her ability to weave language into empowering tales .

Spindle’s End by Robin McKinley. An inventive retelling of Sleeping Beauty but featuring a heroine who is anything but passive–she prefers leather breaches to ball gowns, can communicate with animals and saves herself and her village from the sleeping enchantment.

For Kids and Grown Ups:

Don’t Bet on the Prince: Contemporary Feminist Fairy Tales in North America and England, edited by Jack Zipes. An anthology of 16 feminist fairytales by renowned authors such as Margaret Atwood, Angela Carter and Jane Yolen. Also includes four essays by leading feminist literary critics about the history and societal function of fairytales.

Top: photo of 1919 German book of fairytales by Flickr user crackdog under license from Creative Commons 2.0